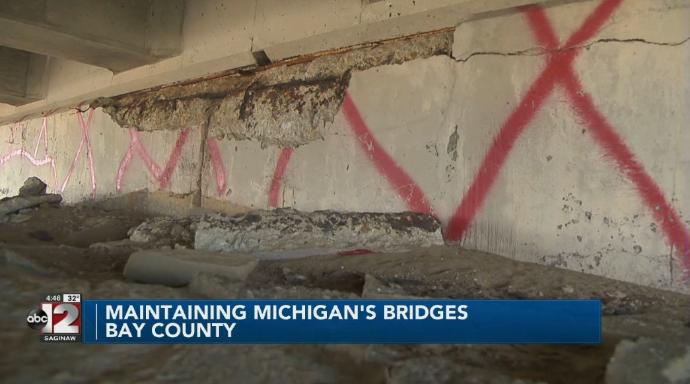 The 38-year-old Jackson woman who got hit by a piece of concrete that fell from a bridge over U.S. 127 this week could’ve been any driver.

The woman was driving north on U.S. 127 when the concrete chunk fell off the Barnes Road overpass near Mason, crashed through her windshield and hit her head. She is expected to recover fully.

But the case highlights the poor condition of Michigan’s infrastructure and the Michigan Department of Transportation bridge inspection process.

The bridge on Mackinaw Road and U.S. 10 in Bay County was built in 1958 and is in poor condition. Routine maintenance is what’s keeping it from becoming even worse.

“The good majority of our bridges are in good or fair condition, but we still have about 6% of them that are in poor condition,” said Chad Skrocki, MDOT’s Bay Region assistant bridge engineer.

Skrocki inspects about 1,200 bridges in the 15 counties that comprise MDOT’s Bay Region.

“Those good and fair bridges will eventually drop down to a poor condition if we’re not able to do the preventative maintenance that we want to,” Skrocki said.

MDOT does a lot of preventative work to make sure situations that happened in the Lansing area don’t happen often. The frequency of inspections increases on bridges rated poor and some have plywood installed underneath to catch falling debris. It’s called a false deck.

The Mackinaw Road bridge in Bay County gets inspected every 15 months.

“We’ve taken all the immediate concerns out of it, but at the end of the day it’s still in poor condition. We’re basically trying to limp it along until we can get it fully replaced in 2023,” Skrocki said.

He said the struggle to keep bridges and overpasses in usable condition will get tougher until Michigan develops a long-term funding strategy for roads.

Drivers can help MDOT keep up with some of these crumbling bridges by reporting what they see as a problem. Skrocki said when they get those reports they take them seriously and usually respond the same day.

Inspections depend on the condition of the bridge. The maintenance is pretty much routine for bridge in good shape.

“Sometimes the conditions will drop quicker than we’d like, which causes us to do more rehab and replacement type work,” Skrocki said.

MDOT is required by federal law to inspect the bridges at least once every two years, but engineers must inspect the bridge more often if it is not in good condition. Inspectors evaluate the deck, superstructure and substructure.

“The deck being the surface you drive on. The superstructure would be the beams and the substructures are piers [inaudible] and we go through and give ratings to every single one of these,” Skrocki said.

If potential problems are found, a more detailed inspection will be ordered, which may lead to lane closures. Small problem areas may get inspected multiple times a year.

MDOT has an interactive map showing the condition of bridges all across Michigan with green, yellow and red dots based on their conditions.

You can view the map here.

This article appeared in ABC 12. Read the full story here.