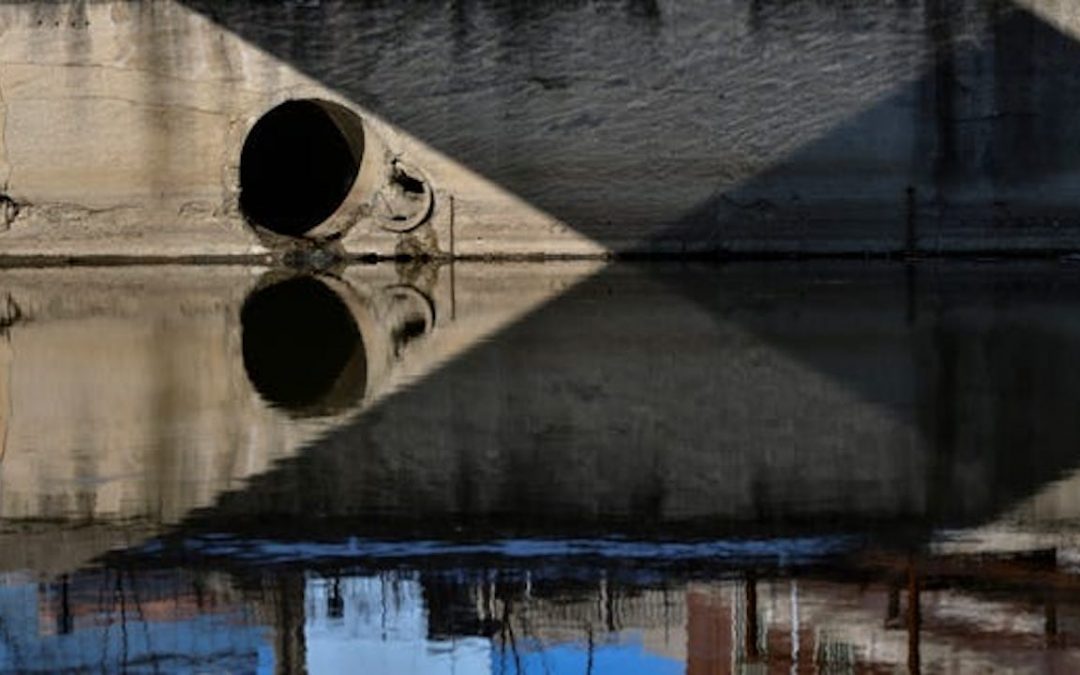 Data shows a gush of raw sewage into West Grand Traverse Bay last month was the largest of its kind in decades.

And experts worry similar spills, and the conditions that cause them, will become more commonplace as climate change drives more frequent weather extremes.

The 10-hour spill began during an afternoon downpour on May 28, flushing about 54,000 gallons of untreated wastewater into the Boardman River, downstream and into West Grand Traverse Bay.

Data collected by the Michigan Department of Environment, Great Lakes and Energy reveals that spill to be the largest discharge of raw sewage in Grand Traverse County for at least the last 20 years, and maybe longer.

“It was kind of the perfect storm,” said Art Krueger, Traverse City’s Director of Municipal Utilities.

The “perfect storm” involved 3 inches of rain in an hour that afternoon, and flash flooding that turned streets into rivers.

“All that rain that came down in that short amount of time just ran off,” said Krueger. “It had nowhere to go.”

Some of it ran into the city’s sanitary sewer system, infiltrating through manhole covers and other unintended entry points. At the same time, high groundwater fueled by a record-high Lake Michigan entered through cracks in the sewer pipes. Soil already waterlogged from wet weather earlier in the week didn’t help matters.

The leak was exacerbated when a backup pump at the Front Street lift station failed to turn on, making it impossible for the sewer to handle the extra flow volume. For comparison, the recent spill was 27 times the amount of sewage that backed up into the Clinch Park splash pad reservoir in 2013.

Krueger said the spill is unprecedented, and the city takes the incident seriously.

“We work very hard to avoid that kind of overflow,” he said.

But even if the backup pump had worked properly, Krueger isn’t sure whether the rain would have overwhelmed the system and caused a spill anyway.

“It would have definitely pushed the limits,” he said. “We don’t really know for sure, because it was just such a surge.”

The rain that day topped what’s considered a 200-year-storm for the area.

Put another way, 3 inches of rain in 60 minutes in Traverse City has a calculated probability of occurring less than once every 200 years.

An increase in heavy precipitation events is one of the most “robust trends” climatologists are seeing in the Midwest and Northeast. That’s according to Richard Rood, a professor of Climate and Space Sciences and Engineering at the University of Michigan.

Rood said during a webinar this week hosted by the Institute for Journalism and Natural Resources that, because of human-driven climate change, increases in extreme precipitation events should be expected into the future. That means increased likelihood of storms similar to the one on May 28.

“These higher storm events that we’ve been seeing, I think there’s a direct correlation to the volume and the number of these sanitary sewer overflows,” he said.

Krueger said Traverse City is doing what it can to seal up its sewers — for example, using durable liners that can be inserted through manhole covers.

They’re also in the middle of an infiltration study. The last study dates to 2016, when Lake Michigan and the water table were much lower.

“We need to pinpoint where [the water] is coming in and hopefully try to stop it,” Krueger said.

He admitted that maintaining sanitary sewers in the face of more extreme rainfall and fluctuating lake levels is overwhelming.

“We’re doing the best we can to prepare and plan and you know there’s not enough money to just replace everything,” he said. “I think it’s about 86 miles of sewer mains just in the city. And I mean, you’re talking hundreds of dollars per foot to replace on this. It’s just astronomical.”