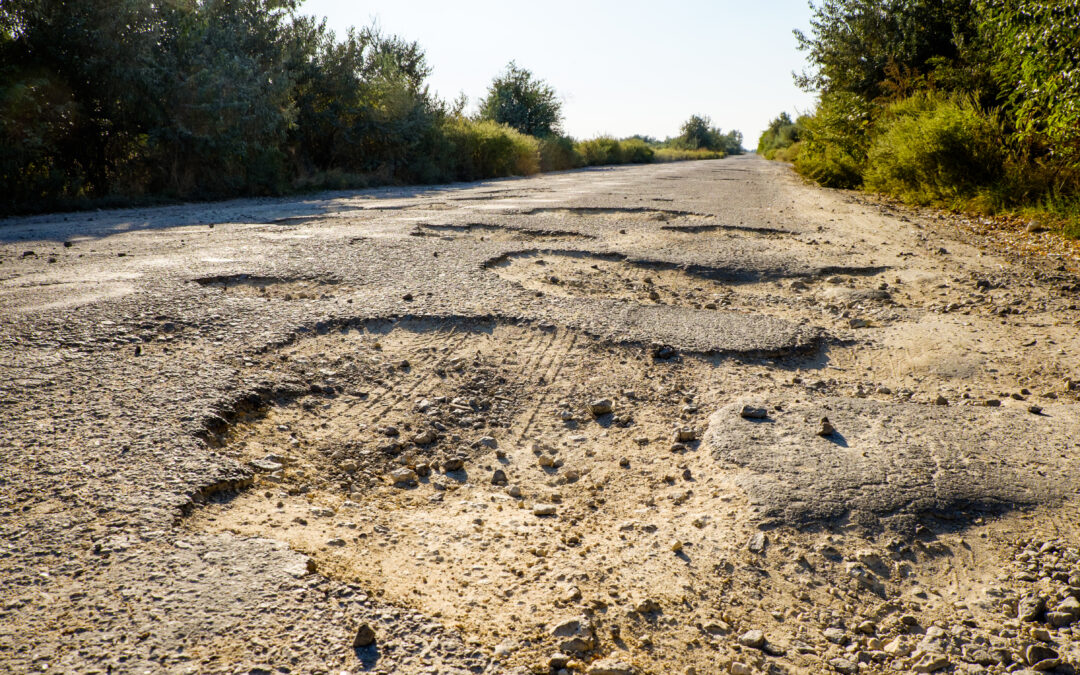 MACKINAC ISLAND — Michigan Gov. Gretchen Whitmer won election four years ago on a promise to “fix the damn roads,” but as she asks voters to re-elect her this fall, the first-term Democrat says she’ll need more time to fulfill that pledge.

I’ve “never suggested that in one term we could fix decades of underinvestment,” Whitmer told Bridge Michigan in an interview at the Mackinac Policy Conference.

But we are making a lot of progress. We have fixed over 13,000 lane miles (and) 900 bridges. Had we done nothing, the problem would have grown a lot worse.”

The day after she won her election in 2018, Whitmer said “people really sent us a very clear message: They want us to fix the damn roads.”

In 2019, Whitmer proposed boosting Michigan’s 27-cent gas tax by 45-cents per gallon, which would have left the state with the highest rate in the nation.

But the plan went nowhere in the Republican-led Legislature, and even Democrats distanced themselves from the proposal that one poll showed was opposed by 75 percent of residents.

Instead, Whitmer has bypassed lawmakers with a $3.5 billion bonding plan, while the state GOP has bashed the governor for failing to fix the roads on her own, signaling plans to remind voters of potholes early and often in the election year.

“Anyone who drives on Michigan roads is aware that ‘fix the damn roads’ was just a false promise to win an election.”

Whitmer scoffed at the criticism.

“Ironically, it will have been the leadership in that (Republican) party that stood in the way of a real fix,” she told Bridge Michigan.

Whitmer’s borrowing program is expected to fund reconstruction on dozens state highways and bridges – but not local roads. To date, the Michigan Department of Transportation has issued $1.6 billion in bonds.

A $1.2 trillion federal infrastructure law is expected to provide Michigan with another $2.3 billion in road and bridge funding over five years. Whitmer has proposed using the first $428 million in fiscal year 2023, including $334 million for state and $94.4 million for local roads and bridges.

Michigan is already “moving dirt,” and “we’re going to be able to do a check of a lot more” because of the “huge investment” from the federal government, Whitmer said Wednesday in a Mackinac Island news conference with U.S. Secretary of Transportation Pete Buttigieg.

Michigan is “exceptionally well positioned to take advantage” of the new federal dollars because Whitmer got a “running start” by focusing on infrastructure at the state level, Buttigieg said in a conference speech, noting Whitmer calls him “the Secretary of Fix the Damn Roads.”

“The American transportation and infrastructure sector now has a level of federal support that we haven’t seen in most of our lifetimes,” said Buttigieg, the former mayor of South Bend, Indiana, who recently bought a house near Traverse City, where his husband grew up.

Whitmer on Wednesday signed an executive directive to speed up state permitting on infrastructure projects that will cost $50 million or more, which she said will allow Michigan to more “efficiently and effectively” pump the new federal infrastructure funding into roads.

Motorists will see the difference this summer during what she predicted will be “the busiest construction season ever” in Michigan, Whitmer said.

She has indicated she is willing to consider a shorter “pause.” Negotiations are ongoing, the governor said Wednesday.

While they’ve disagreed on how or if to generate new state revenue, Whitmer and the GOP-led Legislature have had little problem spending federal dollars. The Democratic governor and GOP leaders in March struck a $4.7 billion deal using state surplus and federal stimulus money to fund repairs and upgrades of the state’s aging infrastructure.

The mid-year spending plan included more than $1.7 billion into drinking water and wastewater system improvement projects, $450 million for parks and trails, $317 million for road and bridge repairs and $250 million for broadband infrastructure grants to expand service.

That bipartisan deal used $945 million from the federal Infrastructure Investment and Jobs Act. But that’s just a fraction of the $10 billion in new and existing federal funding the state is poised to receive for transportation, water and broadband infrastructure over five years.

Whitmer has also created a new Michigan Infrastructure Office to oversee spending plans and collaborative projects. The state is also focused on a new “mainstreets strategy” to improve key corridors across the state, which should help people see “feel the positive impacts” in the “hearts of communities,” Whitmer said in the press conference with Buttigieg.

No long-term fix
Experts say that even the massive influx of federal funding will not be enough to fix Michigan’s crumbling infrastructure, especially with inflation and supply-chain issues leading to price increases for both labor and materials.

The federal dollars can help with upkeep of infrastructure for a few years while Michigan officials seek longer-term solutions, said Rob Coppersmith, executive vice president of the Michigan Infrastructure and Transportation Association.

“The federal money is what I would consider a down payment on our future,” Coppersmith told Bridge on Wednesday. “The reality is, if we don’t do something in the next few years … we are going to be deficit spending again.”

One solution, he said, is to implement the “vehicle miles traveled” tax, a policy that taxes drivers based on the miles they travel rather than how much fuel they consume. In 2020, there were 86.3 billion miles traveled on all roads, according to the Michigan Department of Transportation.

The idea seems to be “gaining popularity in a lot of circles” including among some in the state Legislature, Coppersmith said. For example, House lawmakers included appropriations for a vehicle miles traveled study in its proposed budget, although the final version will come after lawmakers negotiate with the Democratic governor.

“Then we have a structure that’s in place forever so it doesn’t matter if your car runs on grape juice or gas, everyone is paying the same to drive on our road,” Coppersmith said.

Recent polling conducted for the Detroit Regional Chamber suggests roads and infrastructure remain a top issue for Michigan voters, second only to concerns over the economy and inflation.

About 13 percent of voters identified roads as the most important issue facing the state, according to the Glengariff Group Inc. survey of 600 registered voters.

Buttigieg acknowledged inflation and supply chain issues threaten to weaken spending power for state and local governments who are in life for federal infrastructure funding. He blamed global and historical factors that preceded the Biden administration.

Decades of “underinvestment that went on in every part of our transportation infrastructure left us vulnerable to shocks, and then we had the mother of all shocks,” Buttigieg said, referencing COVID-19.

“That’s when our supply chain issues began. It didn’t begin when a certain political party came to power. It began the first week of the pandemic when you couldn’t get any toilet paper.”

To combat supply chain delays, the Biden administration is working with shipping and logistics companies and making longer-term investments in railroad and port infrastructure improvements, Buttigieg said. He noted cities like Alpena and Marquette have already qualified for port improvement grants.

Inflation is a challenge for both the state government and the business leaders gathered this week on Mackinac Island for the annual policy conference, Whitmer said.

“We have planned the work and we are working the plan, but we’ve got to realize we are going to have to be somewhat nimble and creative” with infrastructure spending, she said.