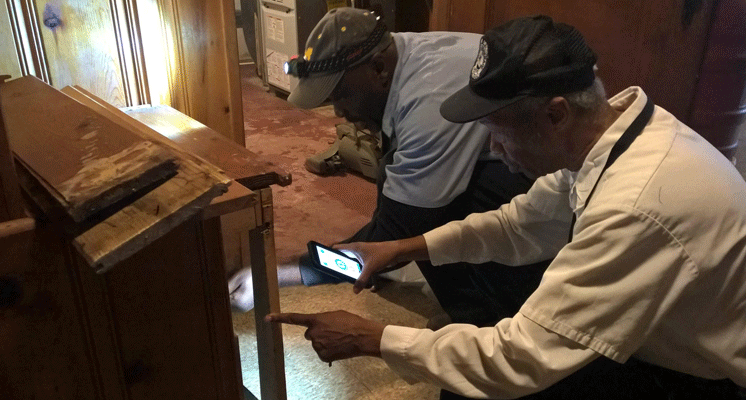 The hunt is on for lead pipes in Detroit.

Flint officials still don’t know where all the city’s lead service lines are. That’s because the building records were in horrible shape.

Back in April, we reported that Flint wasn’t alone. We found at least a dozen other cities in Michigan with the same problem – their records also don’t show how many lead water pipes they have or where they are.

In Detroit, workers are trying to verify the old records.

Verifying records, one basement trip at a time

After the news broke about Flint, Elaine Houston says she started buying bottled water to drink sometimes. She lives in Detroit. Not Flint.

But she knew the home with the brick fireplace she fell in love with was almost 80 years old, and she worried her water might have lead in it too.

So she was excited to get a pamphlet at a town hall meeting that said the city of Detroit was testing water for lead.

And last week, the city sent Michael Deangelo Calliway and Terry Craig, water department employees, to her house to figure out if she had a lead service line.

Houston led Calliway downstairs into the basement, where he poked the water pipe coming out of the basement floor with a magnet. Scraped at it a little with his thumbnail. Knocked on it with his flashlight.

“This is probably copper,” he declares. “Because lead, it’s so flexible that if this was lead I could actually bend it. It’s definitely not lead. I’m 100% sure that’s not lead,” Calliway said.

It’s good news for Houston and it’s a good data point for the city of Detroit.

Elin Betanzo is a water quality expert with the Northeast-Midwest Institute. She’s an expert on lead in water. Detroit hired her as a consultant back in June.