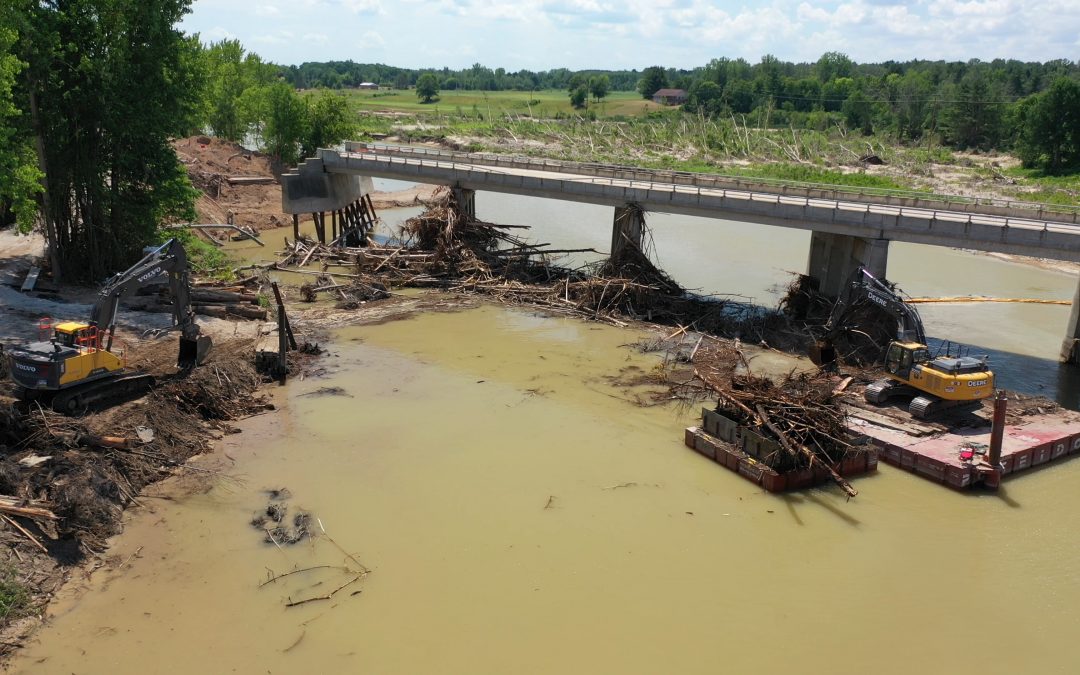 The failure of two Michigan dams that forced evacuation of 10,000 people and destroyed 150 homes was “foreseeable and preventable,” resulting from errors and miscalculations over nearly a century, an expert panel said Wednesday.

The Edenville Dam on the Tittabawassee River in central Michigan collapsed May 19, 2020, releasing a torrent that overtopped the downstream Sanford Dam and flooded the city of Midland. Damages exceeded $200 million.

In a 502-page report, a forensic engineering team appointed by the Federal Energy Regulatory Commission described the Edenville Dam as flawed from the outset. Design and construction shortcomings in the 1920s were followed by years of operating and maintenance deficiencies that finally doomed the structure under pressure from the rain-swollen river.

Despite the “natural desire” to point fingers at a single culprit, “the failure cannot reasonably by attributed to any one individual, group, or organization,” the report said.

“Instead, it was the overall system for financing, designing, constructing, operating, evaluating and upgrading” the dams, “involving many parties during the nearly 100 years of project history, which fell short in ensuring a safe dam at the Edenville site.”

The study team was led by John W. France, a 45-year dam safety consultant who has served on engineering review boards for federal and state agencies.

The Edenville and Sanford were among four privately owned dams built around the same time on the roughly 72-mile-long (116.5 kilometers-long) river, creating a series of reservoirs. The Tittabawassee flows past Midland, about 130 miles north of Detroit, and intersects with the Saginaw River, which empties into Lake Huron.

Each of the dams had earthen embankments, gated concrete spillways and structures for hydropower generation, although Edenville’s federal hydro license had been revoked in 2018.

Throughout its history, “incorrect conclusions were drawn regarding the stability of the Edenville Dam embankments and the capacity of the spillways,” the report said.

“The potential for a non-extreme rainfall event to result in the lake rising by several feet to near the embankment crest was not recognized, and judgments and decisions were made that eventually contributed to the failure or to not preventing the failure.”

The collapse followed three days of heavy rain. Unlike at the other dams, Edenville’s gates weren’t lifted high enough to allow sufficient flow over the spillway from its reservoir, called Wixom Lake. When the dam gave way, the reservoir was about 5.5 feet (1.67 meters) above its normal level.

The report discounted overtopping or internal erosion as causes of the failure, pointing instead to “static liquefaction,” which it describes as “a sudden loss of soil strength” in saturated, loose sands contained in a portion of the embankment.

Use of such sands “significantly deviated from the design plans and construction specifications,” the report said.

In some spots, including the one that failed, embankments were made with steep downstream slopes that didn’t meet modern safety requirements, it said. Occasional stability analyses during the 90-plus years of operation didn’t catch the defects, which could have been fixed.

Dam engineers also failed to adequately consider potentially high runoff and lake levels, the report said, while spillway capacity wasn’t upgraded because the hydropower operations didn’t produce the millions of dollars needed to pay for it.

“The dam failures were foreseeable and preventable,” it said.

This article originally appeared in the Associated Press. For more, click here.