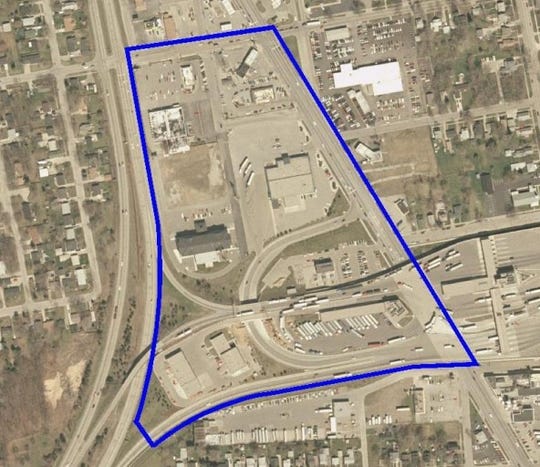 Construction for the final piece of Port Huron’s massive sewer-separation project is expected to begin sometime this month.

The project comes with a total price tag approaching $2 million and more than two decades after the state first ordered the city to stop close to 309 million gallons of combined sewage and stormwater from discharging into the Black and St. Clair rivers each year.

Eighteen other overflow points have already been completed as part of the effort — the last being the $5.4 million separation construction on Nern Street five years ago. A bid for the 19th location, near the site of the abandoned Blue Water Bridge Plaza expansion project, was approved by City Council in March.

Public Works Director Eric Witter said the city initially intended the work to start in 2019 after officials backed a deal the year prior to split cost of construction with the Michigan Department of Transportation.

“We lost the year. We anticipated it starting last year in April,” he said. “But we had to secure some easement from private properties. With that delay, it got pushed back.”

At the end of March, Witter said some construction-related meetings remained, adding that they’d be via conference calls because of the coronavirus outbreak.

“We also have to have coordination meetings with MDOT and some of the business owners,” he said.

However, Witter said they didn’t anticipate it to halt the project itself with completion anticipated by November or December.

What took it so long?

While the sewer infrastructure affected by the last separation project empties into the Black River at the end of McPherson Street, the area impacted by the construction is farther north — and bound by the Interstate 69/94 exchange by the bridge, Pine Grove Avenue and Hancock Street.

The efforts so far has resulted in a 99 percent reduction in overflow volumes to the local waterways, according to the city.

Officials had pressed pause on the final separation while the state awaited funding for the long-promised Blue Water Bridge plaza expansion, arguing the delay would prevent having to tear up infrastructure in the area twice. The plaza’s sewer flow also relies on that combined sewer.

Witter said the city began making its final plan when “the point came a few years back that the plaza was obviously on hold for quite a period of time.”

But the DPW official said even if the plaza project later moves forward, they may not have to disturb the improved infrastructure.

“We have taken some consideration into where the (sewer is) being placed,” Witter said. “Our alignment is adjacent to existing MDOT facilities, and the new sanitary sewer is adjacent to our existing combined storm sewer that’s 66 inches in size. That can’t be moved easily.  … If something does happen in the future, hopefully, that can be worked around.”

At a meeting in March, Port Huron City Council approved a bid for a $1.9 million project for the combined-sewer separation project where the Blue Water Bridge area project would’ve been. (Photo: Brian Wells/Times Herald)

The work will take place in the city’s right-of-way but on MDOT’s property, officials said, and it will be funded with money from the city’s wastewater fund, as well as a share of costs totaling $950,200 from MDOT.

City officials originally approved an agreement with the state in late 2018. That, however, was a $1.4 million deal.

The amount approved by council March 23 was a total of $1,978,537.89, which had been the cheapest of four bids by hundreds of thousands of dollars.

City Manager James Freed later attributed part of the overage to a change in the scope of work and that “your contracts have been coming so far overbid” in general on construction work.

This article appeared in the Times Herald. Read more here.