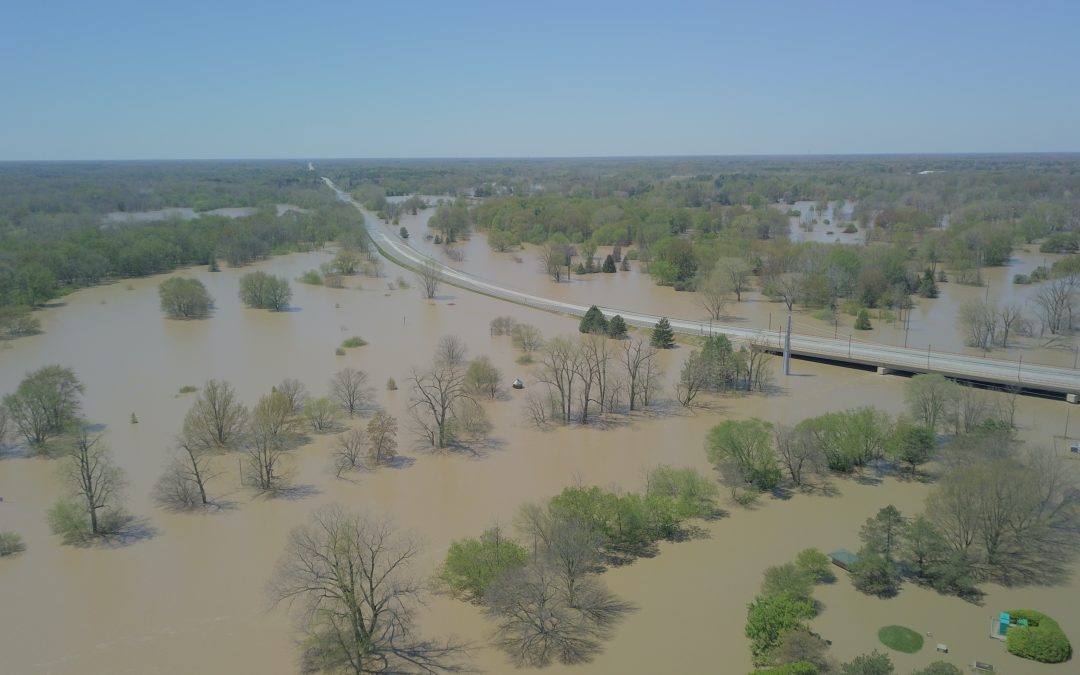 The rushing waters out of two failed dams near Midland highlight a flood risk that extends beyond the mid-Michigan city.

In fact, the breaches are a wake-up call for the entire state as climate change, long-neglected infrastructure systems and a lack of funding all raise concerns about the condition (and investment into) Michigan’s dams.

“The dams are very expensive and very old,” said Rebecca Esselman, executive director of the Huron River Watershed Council. “An event like Midland reminds us that the problem is not going away. In fact, it’s only getting worse as time passes.”

Following heavy rains over 36 hours on Sunday and Monday, the Edenville Dam in Gladwin County failed Tuesday, forcing evacuations of roughly 10,000 residents as water rushed into the Tittabawassee River. Located 20 miles northwest of Midland, the dam had been cited for years with safety violations.

The 2018 Report Card for Michigan’s Infrastructure from the Michigan Section of the American Society of Civil Engineers painted a bleak picture of the condition of the almost 2,600 dams across the state. It gave Michigan’s dams a grade of “C-”.

According to the report:

The statistics are cited by Michigan organizations including environmental groups and trade associations that have been fighting to raise awareness of the need for more consistent dam inspections and repairs.

The state averages two dam failures per year, according to the Michigan Infrastructure & Transportation Association (MITA), an industry group representing companies that work on roads, bridges and utilities. Among previous breaches: In 2003, the Silver Lake Dam north of Marquette failed, releasing 9 billion gallons of water into the Dead River. At least 1,800 people had to evacuate, and damages reached $100 million.

“We continue to say we need to invest in infrastructure,” said Lance Binoniemi of MITA. “These reports aren’t just to show they’re in bad condition, but that there could be a major failure.”

Michigan attempted to create a roadmap to fix its failing infrastructure with a 188-page report published in 2016 by an infrastructure commission set up by then-Gov. Rick Snyder in the fallout following the Flint water crisis.

Described as “a 50-year vision for improving the state’s infrastructure system,” the 21st Century Infrastructure Report tackled energy, transportation and water issues. Among the latter: dams.

“While many of these structures continue to serve a valuable purpose, others are in disrepair, risking failure that can cause significant ecological and economic damage, and threaten public safety,” according to the report.

“These decades-old dams have deteriorated due to age, erosion, poor maintenance, flood damage, or antiquated design, and they are particularly vulnerable during high water flow events.”

Esselman, of the Huron River council, raised concerns over the cost of dam maintenance, repair and insurance. The solution, according to the 2016 report, would require a $227 million investment in additional state funding over the next 20 years. Esselman said “the dam owners, which are often small cities and towns, are bearing the burden of the cost.”

“We have seen a little progress on the federal side, but obviously not enough,” Bioniemi said, noting investment in the Soo Locks as an example. The state also contributed toward $75 million in recent upgrades to the shipping facility in Sault Ste. Marie.

The situation in Midland, he said, calls into question whether dams should even be privately owned. The failing dams there have been owned by Boyce Hydro, which has sold dam-generated power to Consumers Energy.

“This infrastructure was designed for a certain set of conditions at a particular location,” Esselman told Bridge.

“With climate change, we are regularly seeing sets of conditions that go considerably beyond what the infrastructure was designed to handle.”

The state’s lakes and rivers were full before this week’s rain, which created a regional problem over 36 hours when roughly 8 inches of rain fell in Au Gres and East Tawas—about double what fell in Midland. Rising Great Lakes water means there’s no place for that kind of rainfall to quickly drain, said Jerrod Sanders of Michigan’s Department of Environment, Great Lakes and Energy.

While investigations will address the causes of the dam failures in Midland, Sanders said, “ultimately, this is all being driven by unprecedented amounts of rain.”

Sanders is coordinating efforts related to the state’s high water, which in 2019 largely focused on Great Lakes shorelines. However, he said, inland waterways are increasingly becoming a priority.

“The inland high water increase is becoming a much bigger deal as we move into 2020,” Sanders said.

That means the state is likely to see more infrastructure damage. Some may involve dams, but other structural damage is happening to both public and private property, he said. “This is a Michigan-wide problem,” Sanders said.

Meanwhile, dealing with the Midland flooding during the coronavirus pandemic makes the situation even harder, Binoniemi said. But the current focus on COVID-19 doesn’t mean infrastructure needs are on pause.

“This is a clear sign that, yes, the world has been taken over by COVID and every priority has been focused on that,” Bioniemi said. “In the meantime, our infrastructure is still deteriorating and we’re going to have to pay for it eventually.”