Michigan’s crumbling roads: Why are we so far behind? 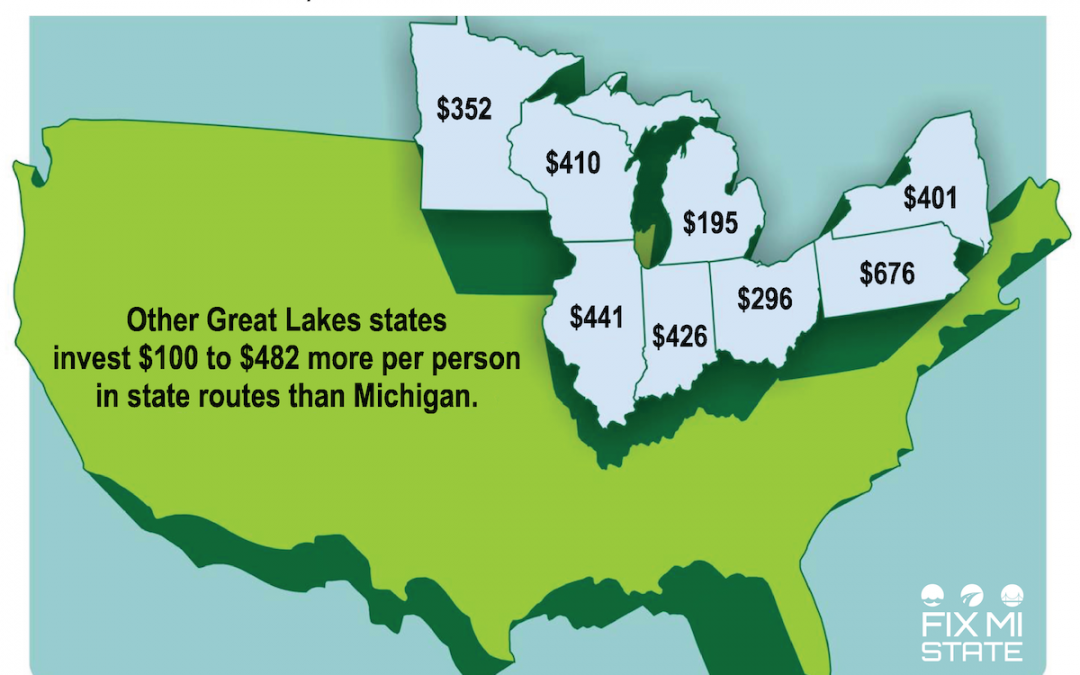 Here’s what we know: Michigan’s crumbling roads are the worst in the country and to fix them, it’s going to take $2.5 billion per year, for decades to come. For years, the state has been cutting corners when it comes to maintaining its state and federal roads, costing Michigan residents hundreds of dollars in additional annual vehicle operating costs – and Michiganders are fed up.

When crossing the border into neighboring states, the question arises: why aren’t these roads in nearly as poor condition as Michigan’s?

According to the Federal Highway Administration, Michigan spends $195 per resident on our state and federal roads — dead last among the Great Lakes states. Ohio spends $296 per person; Minnesota, $352; New York, $401; Wisconsin, $410; Indiana, $426; Illinois, $441; and Pennsylvania, $676. This means that every other great lakes state is investing $100 to $482 more per person in state routes than Michigan.

Both Republican and Democrat states are taking important steps to keep their roads in good condition. A dozen other states have raised gas taxes to improve their road infrastructure: Ohio, Indiana, Tennessee, Connecticut, Maryland, Montana, Nebraska, Rhode Island, South Carolina, Illinois, California and Vermont. Gov. Gretchen Whitmer’s proposed gas tax increase is still the only solution currently on the table for Michigan, a direction countless other states have taken to preserve their roads and improve their infrastructure.

Michigan infrastructure has been underfunded for decades, and it is an issue that touches every house and senate district in the state. You can see the state of your district’s roads by visiting www.fixmistate.org/mydistrict. With every moment that goes by without a solution, with every day wasted, that $2.5 billion figure continues to grow.