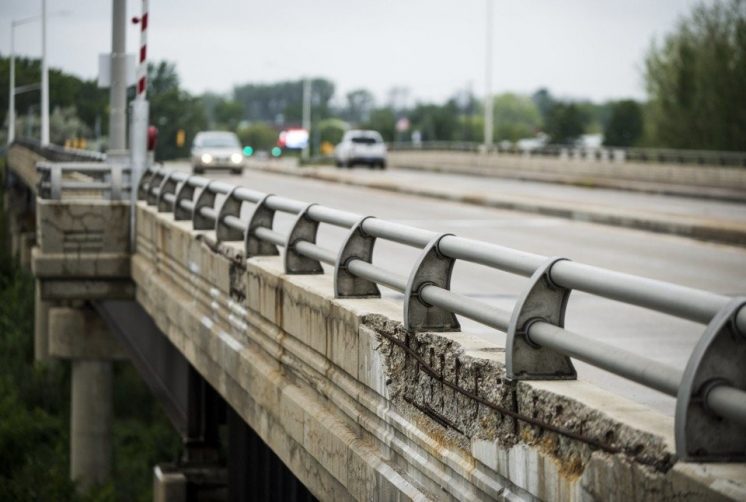 Michigan’s bridges are in such bad shape — 11% are in poor or worse condition compared with 8% nationwide — that fixing them at the current pace could take an estimated 92 years.

As of 2018, there were 62 bridges around the state that were actually closed to traffic, including 13 in Wayne County. Overall, it’s a nightmarish portrait that requires attention.

“There’s plenty of opportunity if you have some information to point your finger here or there or somewhere else,” said Bill Heil, 77, who lives on Grosse Ile, a Wayne County community on the Detroit River beset by bad bridges. “The real question is, where do we go from here? We need a bridge fix.”

Michigan’s new governor, who made fixing “the damn roads” a rallying point of her campaign, said in her State of the State address in February that we can’t forget about the bridges.

Right now, we have crumbling bridges with hundreds of temporary supports holding them up. Buses of school kids and families travel over them — and under them. Chunks of concrete have slammed through windshields.
– Gov. Gretchen Whitmer

The governor’s assessment was not hyperbole. Our problem is that serious.

You can blame the weather. Moreso, you should blame the funding, which is tied to state transportation spending. Michigan, historically, has not put enough money into fixing its bridges.

In 2015, Michigan ranked 42nd nationwide for road spending for every 10,000 vehicle miles traveled, according to the Citizens Research Council of Michigan. Spending has gotten more generous since, but we are still below the national average.

Meanwhile, the latest figures show the number of bridges in good condition across our state began plunging in 2015 after years of being fairly stable.

Here’s more bad news: Unless a fix comes soon, our bridges are likely to get even worse — fast.

Federal regulations require inspections at least once every two years of all bridges longer than 20 feet on public roads, more frequently for seriously deteriorating bridges. Counties, cities and villages own a majority — 59% — of the 11,000-plus bridges in Michigan. The Michigan Department of Transportation owns most of the rest and roughly three-quarters of those bridges are associated with freeways.

Bridges are very costly and really can affect the budget, said Tom Bruff, transportation manager at the Southeast Michigan Council of Governments.

Taking intermediate steps to slow deterioration such as putting weight restrictions on a bridge can help, Bruff said.

“But eventually that’s going to impact things,” he said.

Bridges that are closed or restricted for weight can affect things like garbage pickup or, worse, the flow of first responders or people driving to hospitals.

In 2018 there were more than 500 bridges across Michigan in poor condition that have posted weight limits for vehicles passing over them.

“The reason that we post a bridge, it doesn’t mean that if a big truck were to go across it the bridge would fail. What it means is that repeated big trucks going over it will reduce the service life of a bridge,’’ Chynoweth said.

Across the U.S., Michigan ranked 10th in 2018 for the highest percentage of bridges in poor condition. Among Great Lakes states, only Pennsylvania had a higher percentage. In Ohio and Indiana, just 6% were rated poor. Minnesota had the best bridges, where 5% were rated poor.

Money is probably the biggest issue. But you can thank Mother Nature, too.

Habib Tabatabai, professor of civil and environmental engineering at the University of Wisconsin-Milwaukee, said battling our winters takes a toll on bridges, and more needs to be done to preserve our bridges that are in better condition.

“The northern United States in general and the Midwest in particular have some of the harshest environments for bridges because they are exposed to the environment directly and they are exposed to traffic and most importantly the use of deicing salts, which can do, over long term, tremendous … unavoidable damage to structures,” Tabatabai said.

All parts of a bridge are susceptible to age and weather.

A bridge listed in poor condition does not necessarily mean it is unsafe — but it does indicate the bridge needs attention. In order to be rated poor, at least one component of the bridge — such as its deck, substructure or superstructure — will have a rating of 4 or less on a 0-9 scale. If the structure is a culvert and more than 20 feet in length it receives one rating.

To help extend the life of a bridge in good or fair condition, the Federal Highway Administration’s bridge preservation guidelines outline the importance of preventive maintenance like cleaning the bridge and joints, along with deck sealing to help slow the deterioration of concrete and steel.

“The payoff in extending the service life of a bridge structure is far higher than demolishing and building a new one,” said Tabatabai. One of the important things sometimes neglected is to “take maintenance and prevention steps from day one, when you open the bridge to traffic.”

The deck of the bridge is not the only part that needs to be protected from the elements. Other areas are subject to splashes from deicing salt, too.

“If you are traveling under a bridge, let’s say a snow plow takes the material that has salt in it and splashes on the columns of the bridge above … they start to rust and when they rust they start to expand and causes cracking and spalling,” Tabatabai said.

According to MDOT, the total cost to replace Michigan’s roughly 1,200 bridges that are in poor or worse condition is about $3.4 billion — of which $1.5 billion is needed for state-owned bridges and $1.9 billion for those owned by local agencies. The costs are limited to the physical parts of the bridge and do not include a long list of items also necessary, such as engineering and design, demolition and lighting.

Those costs also do not include funds to maintain or rehabilitate bridges not yet listed in poor condition.

At the current pace — without an infusion of cash — fixing our bridges will take roughly 92 years, said Alison Black, chief economist for the American Road & Transportation Builders Association.

On top of these challenges, costs have risen dramatically over the last two decades.

“Everything is up,” said MDOT’S Chynoweth. “It’s the materials, but then also think about the labor, health insurance rates have gone up, liability, pension liabilities. You name it. It’s everything.”

“As they get older, they require more vigilant attention, just as people get older you have to take care of your health more,” said Jerome Lynch, professor of civil and environmental engineering at the University of Michigan.

There are more than 700 bridges in Michigan that have not had any rehabilitation in at least 75 years, according to a Free Press analysis of state data. Most, three out of four, are locally owned.