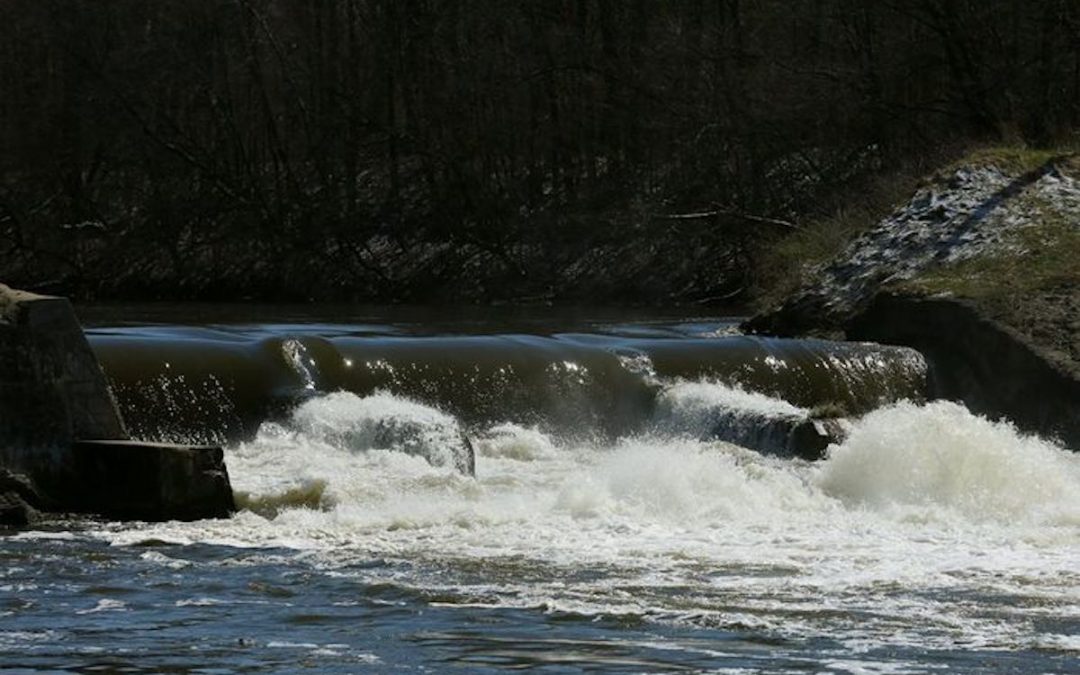 The Sturgis Dam was built more than a century ago as an economic development project for the city of Sturgis.

Michigan’s first municipal water power plant, the dam became operational in 1911 along the St. Joseph River near the Langley Covered Bridge in Centreville.

“It was used to power street lights and give the industry a way to power up back then,” said John Griffith, director of the city’s electrical department.

Today, the dam is still operational, Griffith said. While it generates only a “small slice” of the city’s electricity, the economic benefits outweigh the prohibitive cost of dam removal.

Still, the aging dam is a headache. “You wouldn’t build a dam there today because of the concerns over fisheries and all the other concerns that go along with that people weren’t aware of the early 1900s,” Griffith said.

In fact, the Sturgis Dam is among 1,680 nationwide cited in an Associated Press investigation that identified dams rated as high-hazard because of the potential for loss of life if they failed and are considered to be in poor or unsatisfactory condition.

Emergency plans obtained by the AP indicate that thousands of people living and working downstream could be at risk if those dams were to catastrophically fail, while separate inspection reports cite a variety of problems.

Those include leaks that can indicate a dam is failing internally, unrepaired erosion, holes from burrowing animals and extensive tree growth, which can destabilize earthen dams. In some cases, inspectors also flagged spillways that are too small to handle the amount of water that could result from increasingly intense rainstorms due to a changing climate.

In the case of the Sturgis dam, the Associated Press data notes the dam was rated as “unsatisfactory” in 2011. Since then, Griffith said, there have been “ongoing projects” to ensure the dam’s safety. That includes emergency repairs in July 2016 to the dam’s earth embankment.

“We’re doing our best to make sure this dam is safe and viable,” Griffith said.

Sturgis is not alone in dealing with an aging dam.

Thousands of dams were built in Michigan between the late 1800s and the 1940s, when Michigan’s rivers were an importance source of hydro power, said Frank Dituri, public works director for Traverse City and former ecologist for the Traverse Band of Ottawa and Chippewa Indians.

Especially after Thomas Edison invented the light bulb in 1879, hydroelectric dams were “a way for cities to grow and have have power right next door to where they live,” Dituri said. “There are nearly 4,000 dams in Michigan that are over 80 years old, and they’re typically built with a 50-year life expectancy.”

Now many of those aging dams are “ticking time bombs” in terms of the threat they present to public safety and the environment, Dituri said.

“No one was purposefully trying to disrupt the ecology of streams” through dam construction a century ago, Dituri said. “It made sense at the time. But we know better now.

“River science has come a long way,” Dituri said. “There are thousands of dams that have outlived their lifespan, that segment rivers and degrade the ecological processes that make rivers work.”

One of Michigan’s worst dam breaks in recent years occurred on May 14, 2003 along the Dead River in the Upper Peninsula. Melting snow, five inches of rain and the failure of an emergency water-release system caused the Silver Lake Dam to break, releasing nine billion gallons of water downstream toward the city of Marquette.

The wall of water and sand wiped out five miles of channel, took century-old white pine trees and forced the evacuation of 2,000 Marquette residents. While no one was injured, the flood closed Presque Isle Power Plant as well as the Empire and Tilden Mines, and tore up Tourist Park.

“Every flood we get, I’m not sleeping at night,” Mills said in 2018 about the Otsego Township Dam.

That dam finally has been removed, and now Mills is focusing on Allegan County’s Trowbridge Dam in the Kalamazoo River, which has been labeled as the state’s highest priority for removal because of public safety concerns.

The specific worry about the Trowbridge Dam: It has impoundments filled with PCB-contaminated waste from former paper mills on the river, and a dam failure likely would result in an uncontrolled release of toxic sediments.

Earlier this year, the state awarded $3 million to take out the Trowbridge Dam, but Mills estimates the project will eventually cost up to $50 million.

“That’s the problem” in dealing with aging dams, Mills said. “It’s not cheap to repair or remove. These dams are often very stout; there’s a lot of structure there.

“So we know there are these problems out there,” he said, “but where do you come up with the money?”

Like Griffith and Mills, Dituri deals with the issue on a daily basis — for years, he’s been overseeing a massive project involving four failing dams in and around Traverse City.

The four dams — the Boardman, Brown Bridge, Sabin and Union Street — all presented a “high hazard,” meaning a dam break could cause loss of human life.

A decade ago, stakeholders — including local governments, the state and the U.S. Fish and Wildlife Service — formed a team to figure out a plan of action for the dams, and a decision was made to remove the first three dams and repair the Union Street Dam.

Grants have paid for most of the projects, which cost about $24 million to remove the three dams and restore the river channels. The Union Street project, which is currently in process, will cost another $18 million to $20 million.

The project underscores two important points: While dealing with aging dams is expensive, “there are funds out there available for folks if you take the time to actually put the effort in,” Dituri said.

“And what’s your recourse if you have a failing dam that actually has a public health and safety issues attached to it?” he said.

The bottom line, Dituri said, is that these are dollars well-spent.

“The whole thing is have healthy, restored rivers and to keep the waters of the state in the best condition as possible,” he said. “That includes having fish be able to move up and down the stream and recreate themselves or reproduce on their own without having hatcheries do it for them.

“It’s in all in our benefit to make sure that our river systems, lakes, rivers and streams work the way they should,” he said. “The ability to have fully functioning river systems are is probably the best bang for ecological dollar on the planet.”