Michigan leaders face crossroads with ‘unprecedented’ cash, but how will they spend it? 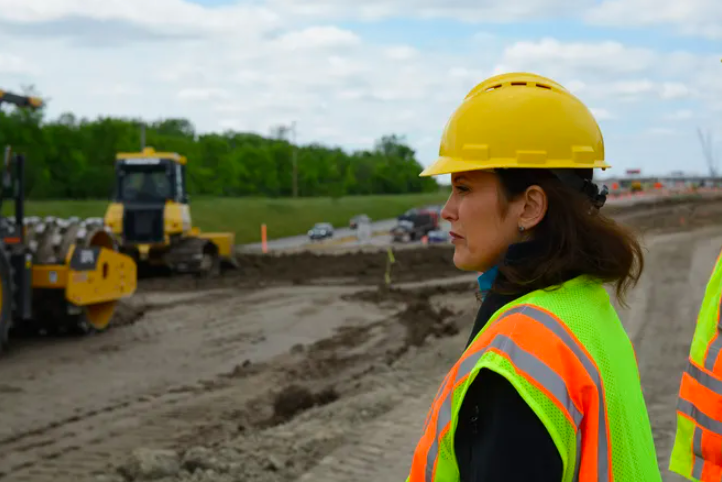 Pressure is mounting on Michigan lawmakers to reach a consensus on the budget and how to spend billions of dollars in federal COVID-19 relief money that advocates believe could provide an “unprecedented” boost for the state’s infrastructure and students.

The Republican-controlled Senate and House have fewer than 10 session days scheduled over the next three weeks before the start of what is effectively a two-month summer break. GOP lawmakers and Democratic Gov. Gretchen Whitmer have failed to allocate billions of dollars in stimulus money provided by the federal government in March, including nearly $7 billion over which the Legislature has broad discretion.

On top of that haul, lawmakers also have more than $2 billion in surplus money in the current year. Combined, the stimulus funds for state government and the surplus nearly match the entire general fund this year: $10.6 billion.

Gov. Gretchen Whitmer tours a construction project in Saginaw on May 27, 2021. Whitmer has argued the state could spend billions of dollars in federal COVID-19 aid to make “transformative” investments to improve Michigan.

“I’ve been alive for 43 years. I can’t think of another time when the state was in such a unique position to invest in our people and our infrastructure,” said Sen. Curtis Hertel of East Lansing, the top Democrat on the Senate Appropriations Committee. “Pox on both of our houses if we can’t figure it out.”

Lawmakers are pondering how to use the money to generate long-term benefits. They have to balance taking their time to make wise decisions with the need to inform schools, local governments and others of what’s ahead. Then, there’s the lobbying from interest groups with competing visions for how to divide up the pie.

Current law requires the Legislature to approve a budget for the upcoming year by July 1. But Senate Appropriations Chairman Jim Stamas, R-Midland, last week introduced a bill to lift that requirement for 2021. That proposal would allow the House and Senate to continue working on the upcoming budget until Oct. 1 when the state’s next fiscal year begins.

Stamas said in a Monday interview that lawmakers are having ongoing discussions with Whitmer’s administration about budget targets for next year. He also said bills allocating some of the federal relief money available to the state could see action in the Legislature this week — a potential positive sign of bipartisan momentum.

“I do have some concerns about July 1,” Stamas said of the budget deadline. “At this point, we’re still shooting to do that.”

Continued delays in divvying up the money would frustrate schools and universities, among others, that have to begin setting their own financial plans, especially given the broad range of funding levels that are possible. The fiscal years for most school districts in Michigan begin July 1.

“Every day that those dollars are not being allocated, they’re not being put to work for the betterment of Michigan,” said Daniel Hurley, CEO of the Michigan Association of State Universities.

“We’re going to learn a lot, this week, in the next three days,” added Hurley, referring to the week’s House and Senate sessions.

Michigan’s rosy financial situation is the result of pandemic-inspired financial support from the federal government and better-than-expected revenues at the state level.

In March, President Joe Biden signed the $1.9 trillion American Rescue Plan as a stimulus package to help the nation emerge from the COVID-19 pandemic. The legislation featured about $18 billion for Michigan. Of that total, the Legislature has to appropriate the wide majority of the dollars, including $3.7 billion that will flow to the state’s schools and $1.1 billion for child care programs.

Michigan Senate Appropriations Chairman Jim Stamas, R-Midland, said lawmakers are having discussions with Whitmer’s administration about budget targets for next year. Republican leaders have urged caution about spending money the right way and not creating financial commitments the state can’t honor in the future.

Lawmakers have broader discretion over about $6.5 billion that can be spent on infrastructure needs or used to respond to COVID-19’s economic damages and $250 million for capital projects. The $6.5 billion in state fiscal recovery dollars are available until Dec. 31, 2024, and the money can be split into batches, meaning it’s likely the Legislature will appropriate at least half the money later.

Meanwhile, about $3 billion remains from the COVID-19 stimulus package signed by then-President Donald Trump in December. However, lawmakers have less discretion over how those funds will be spent. Much of the money will go to public schools and food assistance.

The state also has more than $2 billion in surplus funds in the current budget year and $1.5 billion more than officials previously expected they would have for next year.

The entire current year budget was $62.8 billion when Whitmer signed it into law in September.

The money available to the state could tee up success for Michigan for the next decade, said former state Rep. Jon Hoadley of Kalamazoo, who previously served as the top Democrat on the House Appropriations Committee. Lawmakers should use the moment “to start planning for the long term” by making investments that have lasting impacts, Hoadley said.

In recent weeks, Whitmer has held a string of press conferences detailing how she would use some of the money. Majority Republicans have outlined their own plans in policy proposals.

Getting the decisions right and ensuring the money makes a difference is the priority, Stamas said.

Mike Nystrom, executive vice president and secretary of the Michigan Infrastructure and Transportation Association, labeled the available money “unprecedented” and a “huge opportunity.”

Michigan’s roads, bridges and broadband infrastructure all could get a significant boost in funding. Whitmer ran for governor in 2018 with a slogan of “fix the damn roads.” In January 2020, she advanced a $3.5 billion plan to use bonds for an injection of dollars to improve state highways.

The Michigan Infrastructure and Transportation Association has been advocating for local governments to use a portion of the $4.4 billion they’re receiving for improvements to local roadways.

State Senate Republicans have introduced their own plan to allocate $1.5 billion in federal relief money to improve locally managed bridges.

“Those are the areas where we have a really difficult time aggregating enough money on an ongoing basis to take care of,” Shirkey said. “They always get Band-Aided.”

Hurley of the Association of State Universities said he’s hoping lawmakers make a “major play” to increase college affordability in Michigan. He wants lawmakers to reach a deal on the budget for next year before July 1 so universities can have concrete information for making their own plans.

“They have to set tuition,” Hurley said. “How do they do it if the numbers are all over the board?”

School districts feel similarly. They’re still waiting on lawmakers to appropriate about $840 million from the December round of federal stimulus funds. Whitmer has proposed an array of education-related programs, including spending $262 million to close the funding gap between schools in lower-income and higher-income communities.

“There’s huge potential here to make some serious investments in schools and services,” said Peter Spadafore, deputy executive director for external relations for the Michigan Association of Superintendents and Administrators.

Whitmer’s proposals have mostly focused on new spending initiatives, including a plan to use $250 million in federal money to improve state parks, and allocate $252 million in federal dollars into an effort to expand access to prekindergarten programs.

However, some Republicans and their allies contended the state needs to use its financial surge to pay down debt.

“Wherever we can pay down debt, you free up funding going forward,” said Rich Studley, president and CEO of the Michigan Chamber of Commerce.

While federal relief dollars include restrictions on how they can be used, preventing the ability to go to debt payments, the state’s own budget surplus could more easily be channeled for that goal. Studley advocated for paying down teacher retirement system liabilities.

The Michigan Senate may consider a proposal to extend the deadline for reaching a 2021-22 fiscal year budget plan until past July 1, 2021.
The House has also proposed legislation that would pay off the state’s $600 million portion of the Flint water settlement, instead of using bonds to pay the money over 30 years.

The idea of targeting debt is among the conversations that lawmakers continue to have in Lansing, said Stamas, the top Republican on the Senate Appropriations Committee.

The state has about $1.5 billion in general obligation debt outstanding, according to the Michigan Department of Treasury.

With all of the money available, it could be an unusual situation in Lansing in which all sides get a win, said Hertel, the top Democrat on the committee.

“This is Michigan’s opportunity to roar out of the pandemic,” he said.

This story appeared in The Detroit News. For more, click here.