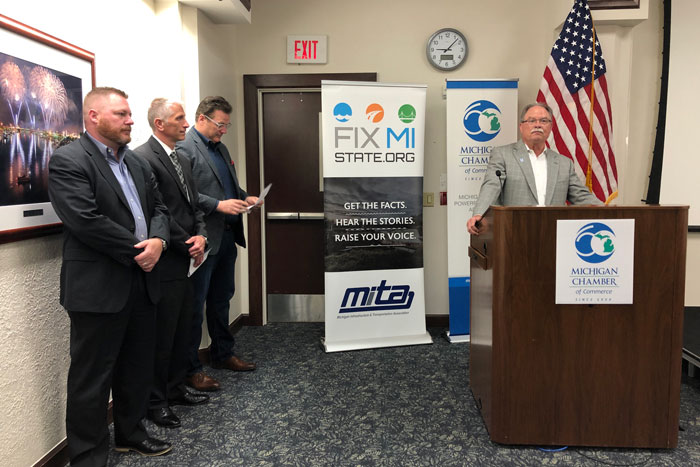 Now that lawmakers have reached a deal on auto insurance, it’s time for them to get cracking on a road funding solution, Michigan business and local government leaders said Tuesday.

During a Tuesday morning press conference, Michigan Chamber of Commerce President and CEO Rich Studley, Michigan Municipal League CEO and Executive Director Dan Gilmartin and others said lawmakers and Gov. Gretchen Whitmer should come to consensus on meaningful funding for the state’s infrastructure needs before the end of the fiscal year.

“We’ve got a window of opportunity in this non-election year,” Studley said, later adding, “This a Michigan problem that needs a Michigan solution now. There’s no pot of gold at the end of the federal rainbow.”

The American Society of Civil Engineers Michigan Section last year gave Michigan an overall D+ grade for its infrastructure system, and a D- grade for roads. Many experts have said Michigan needs at least $2.5 billion a year to adequately address the state’s infrastructure needs.

Whitmer made creating new funding for fixing roads, bridges and other infrastructure a top priority of her budget plan earlier this year, calling for a fuel tax increase of 45 cents per gallon by Oct. 1, 2020 in three, 15-cent increments.

The move would come after the 2015 road plan passed by lawmakers, which is expected to generate $1.2 billion by 2021. But it would also alter that plan, taking $500 million of it slated to come from the general fund this year and sending that to the higher education budget instead.

So far, Republicans in the legislature have been cool to the 45-cent suggestion, with House Speaker Lee Chatfield, R-Levering, saying it was a “nonstarter” in the House.

Studley said the Michigan Chamber is open to road funding policy discussions happening as part of or concurrent to ongoing budget negotiations.

But he was critical of the idea held by some members of the legislature that trimming government spending is enough to fix Michigan’s infrastructure issues.

“There’s only so much you can do with efficiency and effectiveness,” he said. “We’ll continue to challenge the members of the unicorn caucus – the people who believe that there’s a magic solution to this problem that no one’s ever seen before – to explain how they would pay to solve this problem.”

Driving on poorly maintained roads costs Michigan motorists an average of $648 a year in the additional vehicle operating costs, according to a recent study from TRIP, a national nonprofit that analyzes transportation issues.

A recent citizen survey of 3,200 Michigan residents conducted in April by the Center for Michigan found more than 75 percent of respondents believe the state should spend an additional $1 billion or more each year to fix the roads, and that a slim majority are willing to pay at least $100 more a year to fund road repairs.

Fixing the roads has long been a top priority of Michigan residents, and waiting any longer to find a long-term solution will only make the problem worse, said Lance Binoniemi, vice president of government affairs for the Michigan Infrastructure and Transportation Association.

Gilmartin said Michigan communities are suffering due to ongoing infrastructure issues: “There’s really a cost for doing nothing that can no longer happen in this state,” he said.

Tuesday’s press conference came ahead of the Mackinac Policy Conference, an annual event hosted by the Detroit Regional Chamber of Commerce that draws lawmakers, business officials and others in the public policy arena.