Michigan is spending big on infrastructure. Its problems are even bigger. 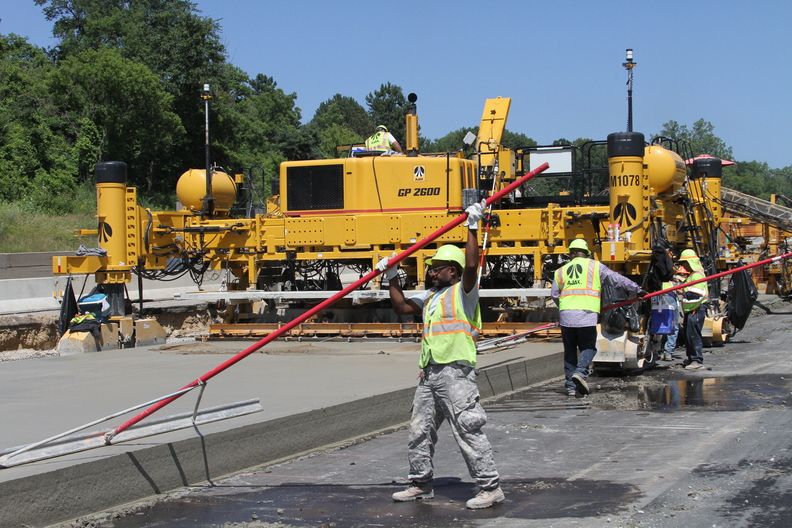 Michigan officials are celebrating a “historic” deal that will pump nearly $3 billion into aging infrastructure, but advocates say the state should be spending that much — or more — every year to adequately address decades of disinvestment.

The one-time funding surge for decades-old water systems, crumbling roads and limited broadband networks is included in a larger $4.7 billion mid-year spending bill that utilizes federal stimulus funding and was negotiated by Democratic Gov. Gretchen Whitmer and the Republican-led Legislature.

The bipartisan deal represents a major political breakthrough in Lansing, but it comes nearly six years after a commission appointed by then-Gov. Rick Snyder projected the state needed to boost infrastructure spending by $4 billion annually to upgrade and maintain roads, bridges, drinking water, dams and other systems.

And that was before the state knew much about PFAS, a drinking water contaminant that has been identified in more than 200 Michigan locations. It was also before hikes in inflation, which is elevating costs for construction firms expected to complete the infrastructure work for state and local governments.

“If we spent every year like this, I think we could fix our system,” said Lance Binoniemi, vice president of government affairs for the Michigan Infrastructure and Transportation Association, which represents road and water infrastructure construction companies across the state.

“But we aren’t going to see years like this every year.”

Kelly Karll, environment and infrastructure manager for the Southeast Michigan Council of Governments (SEMCOG) regional planning organization, assessed the infusion of federal cash that underpins Michigan’s infrastructure deal bluntly: “It’s likely not going to support as much as what people think.”

The funding, part of a larger $4.7 billion spending deal, will pump nearly $2 billion in one-time money into water systems that experts say have too often gone ignored until the kind of PFAS or lead contamination crises seen in cities like Flint and Benton Harbor.

There’s also another $645 million for roads, bridges and other transportation projects, along with $251 million into broadband, which will help expand high-speed internet service to largely rural and remote areas in Michigan that are not yet connected.

Whitmer on Monday began a statewide tour to celebrate what she calls the “Building Michigan Together Plan,” touting “bold, bipartisan investments in the kitchen-table issues that matter most to Michigan families, including clean water, smooth roads, fast internet, and beautiful parks.”

Most of the new funding is coming from federal stimulus and infrastructure laws signed last year by President Joe Biden. And there’s more to come in future years: This year’s budget deal only spends about two-fifths of the state’s federal allocation for water infrastructure, and about one-fifth for roads.

Michigan officials are spending the initial allocation “in a smart way,” said Binoniemi, who called the agreement between Whitmer and lawmakers a “huge deal,” especially for underground infrastructure. “It’s just not enough.”

In South Haven, Public Works Director Bill Hunter said he is not expecting much help from Lansing as he prepares to spend $15.9 million on a state-mandated replacement of the lead service lines.

Hunter noted that Michigan’s cut of the $1.2 trillion federal infrastructure bill already falls short of the investment experts say Michigan needs. Add in skyrocketing inflation that’s pushing up the cost of labor and materials, and the fact that high demand makes it easier for contractors to justify high bids on projects, and the money will accomplish “a fraction of what was promised,” he said.

Suzanne Coffey, interim CEO of southeast Michigan’s Great Lakes Water Authority, which is poised to receive $25 million from the state, echoed that message: “It can’t be a one-time deal,” she said.

Snyder’s 21st Century Infrastructure Commission, created in the wake of the Flint water crisis, recommended in 2016 the state spend nearly $1 billion a year on water infrastructure upgrades over the next 20 years. The deal reached last week by Whitmer and the Legislature would cover about two and a half-years of that.

It will be some time before cities know how the state money will be allocated, and whether they can expect a cut. But one thing is clear, local public officials say: The money won’t go as far or as fast as you might think.

Take for example the port city of Escanaba in the Upper Peninsula. It is soliciting bids for a $5-million project to replace lead service lines this summer.

Jeff Lampi, who supervises the city water system, is bracing for sticker shock.

“Materials are extremely hard to find, all the prices are going up, and there’s more work than there are contractors,” he said.

“I’m not even sure we can afford to do the work when the bids are opened.”

Lampi said he’s heard horror stories from other communities whose projects have blown through budgets as contractors increase prices by several percentage points a month.

For now, he’s just happy he has the materials to do the job. A supplier called him Monday to say the city submitted its order just in time: Plumbing materials are running low amid supply chain shortages, and a restock could be three to six months out, he said.

Michigan is requiring local governments to begin replacing lead service lines in the wake of the Flint water contamination crisis, a massive undertaking that experts say could cost as much as $2.5 billion statewide through 2041.

There’s also another $55 million for local governments to address PFAS and other chemical contaminants that threaten drinking water systems, along with $15 million specifically to remediate PFAS contamination at a former paper mill site on the shore of Muskegon Lake in Muskegon County.

“This is a really great step in the right direction,” said Charlotte Jameson, chief policy officer for the nonprofit Michigan Environmental Council. “It’s going to give us a huge lift over the next few years, but we still have a need for more sustainable new sources of revenue in the water space.”

Snyder’s commission identified a $800 million annual gap in drinking water infrastructure funding six years ago, but the current need for additional funding is likely north of $1 billion annually, according to environmental council estimates.

The federal government helped local governments build water systems that are now nearing the end of their life cycle, Jameson said, “and there’s no way that we have the rate base to be able to sustain these systems without having incredibly unaffordable water rates.”

Additional federal funding in future years is going to be “critical,” she said.

Among other things, Miller said, the funding will help Macomb store combined sewage and storm water flow inside an 11-foot-diameter pipe that serves Eastpointe and most of St. Clair Shores, potentially reducing sewage discharges into Lake St. Clair by 30 percent.

The new state funding will also help the county finish rehabilitating a giant “interceptor” pipe along 15 Mile Road that carries sewage from nearly 600,000 residents and collapsed in 2016, leading to a massive sinkhole, she said.

“We have hundreds of millions of dollars of infrastructure needs down here, but this is a huge, huge help, and we are just very appreciative of the state Legislature, both Republicans and Democrats, for voting for this,” Miller told Bridge.

More than 40 Michigan communities, primarily in Metro Detroit, have combined sewer and stormwater overflows that can pose significant risks to the environment, according to the U.S. Environmental Protection Agency.

Separating them can be expensive: In West Michigan, Grand Rapids issued $400 million in bonds to do so. Taxpayers will be paying off the debt for nearly three decades.

Communities that still have combined systems utilize “huge retention basins that under normal circumstances can hold” all sewage, said Jameson, with the Michigan Environmental Council.

“But when you get a huge rain event, the capacity is overloaded and partially treated waste (is discharged) into the lakes and rivers,” she said.

Elsewhere in Metro Detroit, SEMCOG is launching a task force to triage water infrastructure needs across its seven-county service area.

Between 20 and 30 percent of the region’s water infrastructure is in poor condition, Karll said, and local communities need a combined $3 billion annually through 2045 for stormwater, wastewater and sewer projects.

Oakland County Water Resources Commissioner Jim Nash, who co-chairs the SEMCOG task force, said SEMCOG members hope to achieve economies of scale by teaming up on projects, instead of competing against one another for contractors on smaller local projects.

“If we really started to be strategic and work together to align projects across the region I think we could start to see some cost savings,” he said.

About those damn roads…
The $645 million in transportation infrastructure funding included in the deal is unlikely to fully “fix the damn roads,” as Whitmer promised in her 2018 campaign, but it will complement the governor’s ongoing $3.5 billion bonding program.

The spending bill includes $317 million for road and bridge repair or replacement, including $238 million for state trunkline construction and $79 million for local roads.

Another $66 million will be used to purchase pump station back-up generators to help the state avoid the kind of major highway flooding episode that happened last summer in metro Detroit.

Back in 2016, after Michigan raised fuel taxes and registration fees, Snyder’s 21st Century Infrastructure Commission recommended the state increase road, bridge and other transportation spending by another $2.63 billion a year to reverse ongoing deterioration.

Whitmer in 2019 proposed a 45-cent per-gallon fuel tax hike that would have generated $2.1 billion a year in additional revenue for roads, but her plan landed with a resounding thud in the Republican-led Legislature.

Whitmer instead went it alone with a bonding plan to borrow $3 billion for one-time construction projects on state roads and bridges.

Even with that additional funding, Michigan roads are expected to be in worse shape in 2030 than they are today, according to the state’s Transportation Asset Management Council, which projects 44 percent of roads will be in poor condition by then, up from 42 percent in 2020.

Binoniemi, with the Michigan Infrastructure and Transportation Association, said he is “encouraged” by the new spending plan and anticipates lawmakers will continue to allocate available federal infrastructure and stimulus funds to roads.

But at the same time, costs are going up for contractors, “and we’re concerned that the large investment will just get eaten away by inflation,” Binoniemi said.

“We’ve seen a huge spike in steel (prices),” he said, which means “bridge repair and bridge construction is pretty expensive right now.” Likewise, there’s been a “huge spike” in the cost of concrete, which is used in both road and underground infrastructure projects, he said.

Unlike some sectors of the economy, the road construction industry is not facing a major workforce shortage that could drive up prices further, Binoniemi said. In fact, he said, road construction companies actually gained employees during the pandemic because they were considered an “essential industry” that was never subject to lockdown orders.

“Our workforce is ready,” he said.

Whitmer’s proposed budget for fiscal year 2023, which she is still negotiating with the Legislature in hopes of another potential deal by summer, includes an additional $578 million in one-time federal infrastructure funding for road and bridge repairs across the state. ‘

While those talks continue, the governor is expected to sign the mid-year spending bill as soon as it reaches her desk. The bipartisan deal, Whitmer said Monday, is “a testament to what is possible when we put Michiganders first.”

This article originally appeared in Bridge. For more, click here.