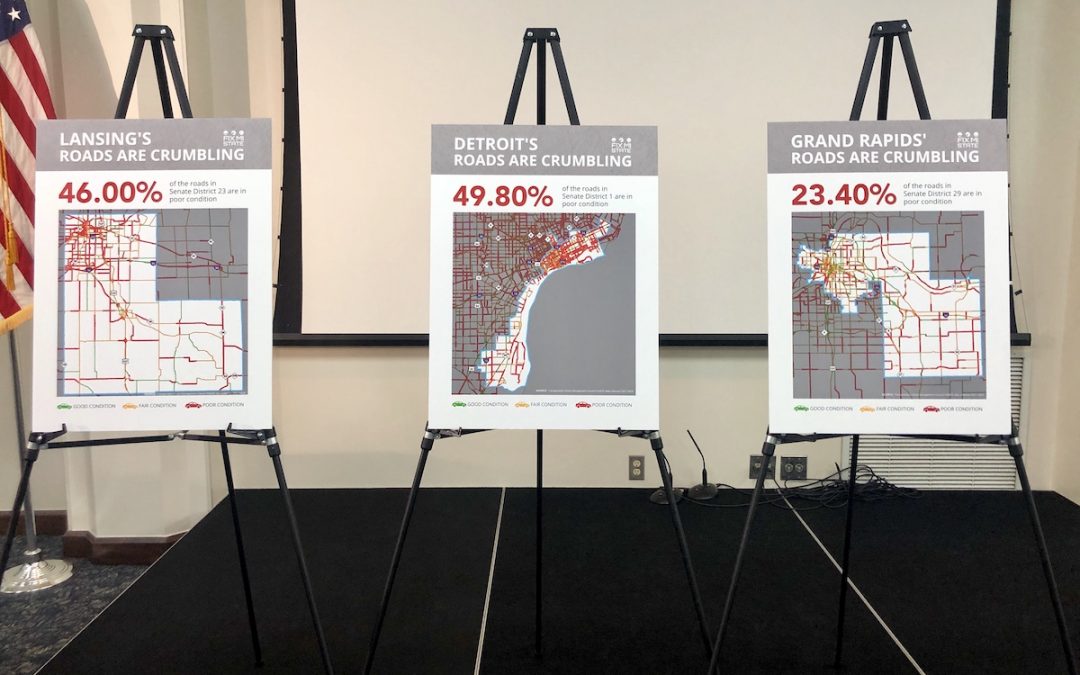 Michigan’s Gov. Gretchen Whitmer’s 45-cent gas tax increase has been on the table since March, but since that time there has been no other option to fix the state’s crumbling infrastructure put forward despite plenty of gripes about the sizable increase.

Whitmer and her administration say the state needs to find a way to increase revenue by about $2 billion to fix and maintain Michigan’s current roads and bridges. Since the Democratic Governor’s first budget rollout, there have been several ideas talked about in both chambers of the legislature, but nothing concrete produced.

Several senators made their way back to Lansing Tuesday for the first time in two months for a quick morning session of bill introductions and referrals. Senate Republicans had a closed-door caucus meeting, but no budget or road funding plans were discussed officially on the floor of the Legislature.

Business leaders are holding an event in a few moments to “call on the Legislature and Gov. Whitmer” to find a permanent solution to fix the roads.

Here are a few maps that are on display showing road conditions around Michigan. pic.twitter.com/umLva1fIlJ

Meantime, several business groups held an event just a few steps from the Capitol to urge the Lansing legislative leaders to iron out a deal – sooner rather than later.

“The time for action is now. I have confidence in the governor and the legislative leaders,” Rich Studley, president and CEO of the Michigan Chamber of Commerce, said Tuesday. “My sense is that Democrats and Republicans in the House and Senate know that the governor and legislative leaders have been meeting and have been talking. Many of them are waiting to get back into session and to hear from their leaders about a proposed agreement.”

The 45-cent gas tax increase was met with proposals from the House and Senate that varied from speeding up the revenue distribution of the 2015 legislative-approved plan to increase gas taxes to using sales tax captured at the pump to patch potholes. Nonetheless, a deal hasn’t been made as the Oct. 1 government shutdown looms.

“We won’t get to that point. They know that if that was to happen, it would reflect poorly on both the legislature and the administration,” Studley said. “I’m not aware of anyone in any position of authority that is remotely thinking about that as a possibility. That would be a giant step backward.”

Whitmer has said previously she would consider a budget continuance to avoid a shutdown, only if “good faith negotiations” are happening with legislative leadership. For now, there are weeks to go before the deadline becomes a reality.

Andrew Johnston, with the Grand Rapids Chamber of Commerce, was in attendance at the event calling more attention to the budget impasse. Good roads help equal good business, Johnston said and the image of Michigan shouldn’t be a patchwork of pothole fixes.

“Michigan itself is a brand and I want the brand to be a growing brand, I don’t want the brand to be about potholes and crumbling infrastructure,” he said. “People who have fleets in multiple states they say, ‘boy the fleets I run in Michigan, I have to plan more in my budget for maintenance because of the condition of your roads.’”

Business Leaders for Michigan was another group represented Tuesday at the Chamber of Commerce. Doug Rothwell, president and CEO of the group, said a user fee-based system is the best option, and all but begged the legislature to bring another option to the table to generate between $2 and $2.5 billion for infrastructure improvements.

“Business leaders are united in finding a solution,” Rothwell said.

New, legislative district maps were introduced to show lawmakers the condition of roads in their home areas. The maps were unveiled Tuesday by Monica Ackerson of the Michigan Road Preservation Association and were broken into state House and Senate districts. She said the color-coded roads mirror a stop light and she wants lawmakers to see for themselves the deterioration.

“Yellow roads are really the caution light that have been ignored over the past decade of decline,” she said. “The difference between a fair road and a poor road is double the cost.”

Earlier in the budget negotiation process, some lawmakers questioned if the state needed to generate new revenue. Studley all but threatened the support of the powerful organization if lawmakers don’t get on board with some sort of permanent road funding fix that includes new revenue.

Studley said the Michigan Chamber of Commerce takes a holistic look at someone’s voting record before making endorsements, but said road funding is a top priority and gave some encouragement to any legislator who is on the fence about a future vote.

“This will be a key issue for us, passage of this legislation will be a key roll-call vote and we’re focused on encouraging and supporting people who do the right thing,” he said. “I would say to conservative lawmakers, we are a conservative organization. The business leaders that we represent understand the difference between spending and operating expenses and investing. There is no example in Michigan’s legislative and political history where a lawmaker who voted for a good and responsible package to fix the roads wasn’t re-elected.”