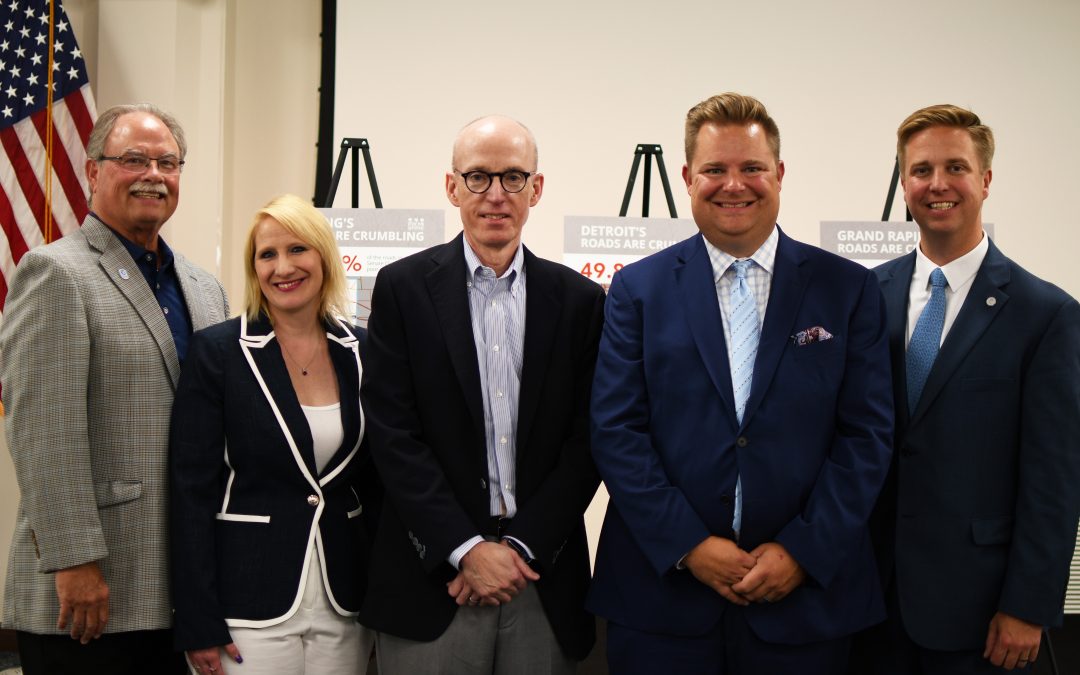 LANSING, Mich. — Leaders of Michigan business organizations that represent tens of thousands of employers across the state today joined together to urge the Legislature and Governor to include a comprehensive plan to fix the roads in the new state budget that lawmakers must pass before Oct. 1.

At a news conference just a few blocks from the Capitol, the business leaders joined with the Fix MI State campaign to also release maps that detail the crumbling condition of the roads in the districts of all 110 state Representatives and 38 state Senators. The maps will be shared with the state lawmakers, the media and residents in the legislators’ districts.

Speaking at the news conference were leaders of the Michigan Chamber of Commerce, Business Leaders for Michigan, the Grand Rapids Chamber, and the Detroit Regional Chamber.

“Roads and bridges are the foundation of Michigan’s economy, but they won’t fix themselves and are costing businesses and taxpayers more money every year,” said Rich Studley, President and CEO of the Michigan Chamber of Commerce. “I stand here with other leading employer organizations to urge the Governor, the House, and the Senate to take action now on the next installment of road funding.”

As Michigan continues to underfund infrastructure, fixing the problem becomes more and more expensive. Industry experts, business and community leaders, and politicians on both sides of the aisle agree that the state needs to invest in infrastructure for the next two decades to actually solve Michigan’s infrastructure problem.

“Multiple independent studies tell us $2 billion is the minimum annual investment needed to get our roads in better shape,” said Doug Rothwell, President & CEO of Business Leaders for Michigan. “Our state’s largest employers make decisions every day about where to invest and grow, and those decisions depend on Lansing’s decisions. If our elected leaders don’t prioritize the funding to modernize our infrastructure, we are at risk of losing future economic growth to other states where the roads and bridges are being appropriately maintained.”

Since 2003, the Michigan Department of Transportation and local road agencies have used a uniform rating system called PASER (Pavement Surface Evaluation and Rating) to collect pavement data. The data is collected by the Michigan Transportation Asset Management Council (TAMC). Since 2004, TAMC has prepared annual reports for the Michigan Legislature on the declining condition of Michigan’s roads and bridges.

Using PASER data from as recently as 2018, the maps released today by legislative district highlight just how drastically Michigan roads continue to decline, falling into poor condition. The maps clearly demonstrate why Michigan voters have ranked fixing the roads as the top issue facing the state in many public opinion polls over the past three years.

“The colors on these maps are just as important as those on a stop light. Green – good roads are good for Michigan residents and economy. Yellow – fair roads are the caution light that has been ignored over the past decade of decline. And most importantly, red – poor roads represent the pothole filled streets that frustrate Michigan residents, and congested highways and weight-restricted bridges that stifle business growth,” said Monica Ackerson, APR, Executive Vice President of the Michigan Road Preservation Association. “We must fund this need now, or pay a lot more later as the cost to bring those roads back to good condition doubles when a road falls from fair to poor condition.”

More information about the state’s infrastructure needs, including today’s newly released maps, can be found at www.FixMIState.org, a website created by the Fix MI State campaign, which is being led by the Michigan Infrastructure & Transportation Association.