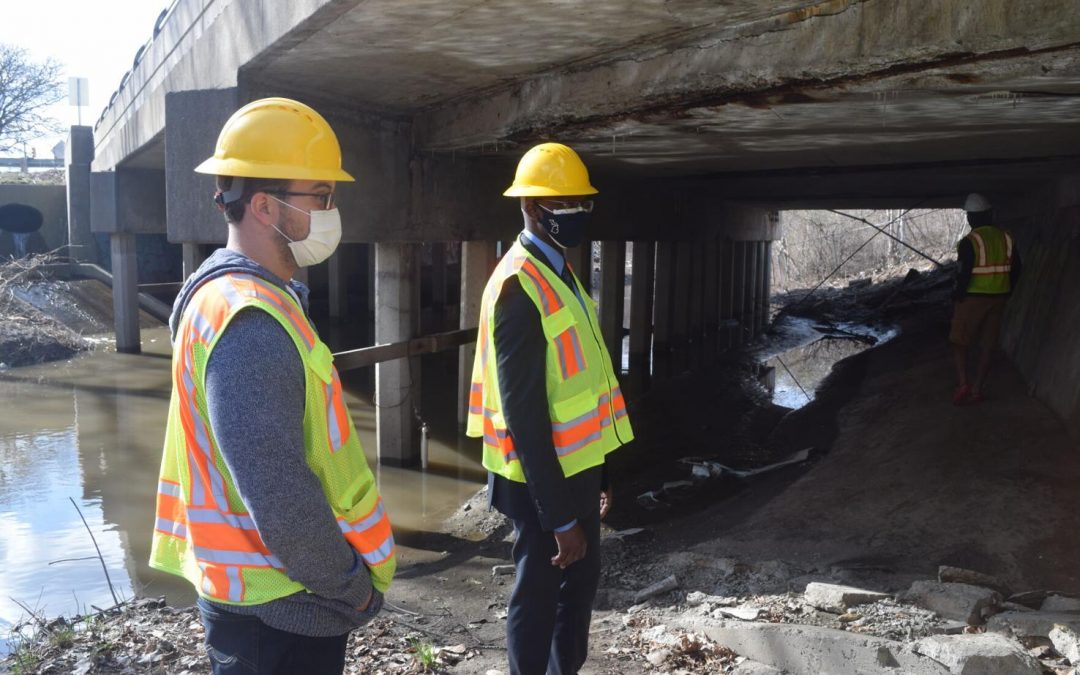 The funny thing about crumbling bridges is that to the naked eye, they often appear to be perfectly fine.

But a closer look can reveal some major issues, especially to professionals whose job it is to inspect bridges.

A great example of this is the Goddard Road Bridger over the Sexton-Kilfoil drain in Allen Park. Lt. Gov. Garlin Gilchrist visited the bridge March 26, along with several people who work for the Michigan Department of Transportation.

Gov. Gretchen Whitmer recently did something similar when she visited the Miller-Rotunda Bridge in Dearborn, one of the projects that will be included in her “Bridge Bundling” proposal.

If approved, the proposal would allocate $300 million in one-time payments to repair 120 local bridges, including 59 that are closed or should be closed for replacement. The Miller-Rotunda Bridge is on the list.

In some instances, the bridges are in fair enough condition that they can remain open, but with limited weight capacity.

Both Whitmer and Gilchrist have been visiting bridges across the state that could benefit from this proposal.

The Goddard Road Bridge, near where Goddard Road intersects with Old Goddard Road and Moran in Allen Park’s southernmost section, is hardly noticed by motorists who routinely use it.

But the bridge’s true condition can be better understood by looking underneath it, which is what Gilchrist did, along with the MDOT employees who informed him that the only work done on the bridge in recent years has been overlays.

With as many bridges as Gilchrist has seen throughout the state, he pointed out that he’s never seen a part of a bridge jutting out from its underside “literally hanging down to the water,” as was the case with the Goddard Road Bridge.

After checking out the bridge, Gilchrist said the reason he and the governor have been visiting bridges across the state is because Michigan still has an infrastructure challenge.

“In the midst of everything we’ve been dealing with, we still have bridges that are unsafe, that are in need of repair,” he said. “We need to make sure that they can get repaired quickly, efficiently and effectively, so as part of our budget proposal we have put in place funding that will fix bridges like this one.”

The lieutenant governor said that in addition to improving safety, repairing bridges will attract businesses and investment in Michigan. He said entities that want to invest in the state can see that the state is willing to invest in itself.

“I want to come and see the work that can be done,” he said. “The professionals from MDOT, and our county and business partners are eager to do this work. As you heard here, there is a creative approach to bundling 25 bridges in the county together.”

Gilchrist said bundling allows contractors to be creative while meeting the needs of the people in affected communities. He said rather than be overly restrictive in the request for proposals process, the state should be asking contractors to bring them their creativity and their ideas.

He sees this as a way to be innovative and to save costs.

Gilchrist said he is an engineer and enjoys seeing the state’s bridges for himself.

He mentioned again the one piece extending from the underside of the Goddard Road Bridge into the water, something an observer would never see standing on the bridge.

“It’s a danger, it’s a risk, which is why we need to invest in our infrastructure,” Gilchrist said. “That’s why we can’t go generations without investing in it. This bridge was built in 1960. Beyond the resurfacing work, there hasn’t been a lot of work done on this bridge.”

Gilchrist said he and Whitmer are urging the state Legislature to approve this proposal so that repair and replacement work can be done on bridges like the Goddard Road Bridge in Allen Park.

This article appeared in The News Herald, for more, click here.