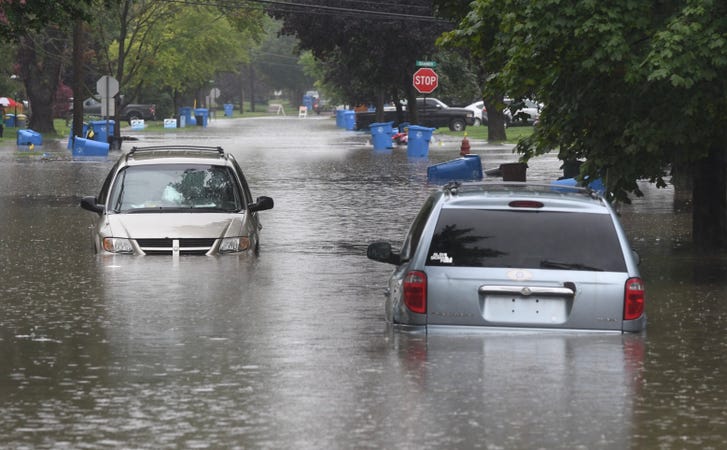 Three weeks after historic rainstorms devastated Metro Detroit, another heavy round of wet weather swooped in Friday, submerging freeways and residential streets and flooding basements all over again.

It’s been a nightmare for Ebony Walker, who has lived in Detroit’s East English Village neighborhood for close to a decade.

On Friday, Walker, 41, was wrestling with rising water in her basement a few weeks after a June 26 storm dumped about six inches in Detroit over a five-hour span, leaving her basement muddy and requiring her family to rent a dumpster.

“It’s happening again,” Walker said Friday, with a foot of water in her basement and rising.

Last month, she said, “we got five feet” and the drywall was “gutted down to the bricks and beams.”

Wayne and Washtenaw counties were hit the hardest Friday with two to three inches of rain that fell throughout the day starting as early as 8 a.m. Dearborn got as much as 3.4 inches of rain while Bloomfield Hills received 1.6 inches, according to the National Weather Service in White Lake Township.

Friday’s 2.13 inches of rainfall at Detroit Metro Airport was the highest on record for July 16 based on weather service data. The rainfall also ranked the ninth highest of all time for one day in the month of July.

Meteorologist Megan Varcie of the National Weather Service said the rain should taper off going into the evening and overnight and become more scattered with pop-up showers possible for Saturday.

Cheryl English stands in her basement workspace Friday that is flooded with several inches of water three weeks after another heavy rainfall flooded her Detroit home. “The part that makes me angriest is no one is taking responsibility, they are blaming the homeowners,” English said. “I’ve been down on my hands and knees cleaning this floor for three weeks, trying to get it clean. It’s just emotionally exhausting.”

“By tomorrow morning, things should be dry and those dry conditions should last through the weekend and into early next week,” she said.

“Most of the rain that we were expecting has already fallen with those two to three inches that we saw, especially across Wayne County,” Varcie added Friday. “We could see an additional half-inch of rain — maybe up to an inch in some local spots — but the majority of the rain has moved off to our east for this evening.”

Saturday is a bit too late for Detroiter Cheryl English. The self-employed creative artist said Friday that her basement workspace was once again flooded, this time with three to four inches of water, just weeks after the first ordeal.

“I’ve been down on my hands and knees cleaning this floor for three weeks, trying to get it clean,” said English, who dropped her head and covered her face, adding: “It’s just emotionally exhausting.”

Friday’s steady rains shuttered sections of Interstate 94 between I-75 and I-96 for several hours Friday. But late afternoon, they had reopened.

The conditions meant a flurry of activity for municipal workers and the state road department.

U.S. Rep. Debbie Dingell, D-Dearborn, shared a photo from the corner of Riverside and Tuxedo in Dearborn, which flooded in June storms and flooded again Friday.

“We need to figure out why these ‘once-in-a-lifetime’ storms & floods keep happening and get a plan in place to prevent more damage,” Dingell tweeted.

Attention during the June 25-26 rainstorm focused on the Great Lakes Water Authority and reported outages at the Connor Creek Pump Station that was blamed for flooding in homes in the area. GLWA officials acknowledged the pump station “experienced a partial disruption in service,” but emphasize it was never off-line and repairs returned the station to “full operational status in under one hour.”

“Although it was not a complete power outage, we dispatched a response team to the site,” according to a Water Authority statement. “The team quickly initiated the emergency generator and worked closely with the energy partners to resume full operations of the pump station.”

The power issues have since been resolved and the station is operating as designed, the statement added.

“GLWA will conduct an after-event analysis and work with the residents in the tributary system to determine if flooding was experienced,” it reads.

In Dearborn, emergency sirens activated Friday around noon and continued for several hours, warning residents not to travel as underpasses on the city’s east began to flood. Water and sewerage crews also tended to flooding at Greenfield and Rotunda and south of Michigan Avenue.

A member of the Wayne County road crew clears drains of debris at the closed and flooded Greenfield Road near Michigan Avenue in Dearborn on Friday, July 16, 2021.

Steven Shaya, Wayne County engineer and deputy director of roads, said the pump station on Greenfield can handle 1,000 gallons of water per minute, but crews were using additional generators and smaller pumps to help pull water out from the underpasses.

“The system can just not handle that much torrential downpours in such a period of time. So when we got the message, we got the crews out here … but it’s just too much water in so much time,” said Shaya, adding the pump station didn’t lose power as it did on June 26.

There’s also a pump station on Wyoming leading to the south end of Dearborn that was working efficiently, but in the case of an emergency, Shaya said a crew was sent with a super vac and additional pumps.

“Hopefully this will not get any worse,” he said. “A lot of people are getting nervous about flooding.”

Nour Almlikye was visiting her mother in Dearborn Heights Friday when she got stuck in high waters near Gulley Road and Amherst Street.

“I was driving normally until I sped up in the middle. I pressed the gas because if you’re slow, of course, you’ll ruin the engine,” said Almlikye of Dearborn. “My car was driving until I made it out. I made it out of the water, then the car just stopped and went into reverse by itself.”

Almlikye said she “lost everything” in the basement of her house in June, and her mother’s basement in Dearborn Heights, which was ruined, too, then, was hit again on Friday.

“Last week, we brought a company to clean it and now it’s back,” she said. “It’s not right. We pay a lot of taxes. Where does the tax go?”

Almlikye said she owns two houses and rents one out, both flooded in the prior storm and on Friday. The single mother said she’s expecting the damages will cost more than $10,000 to repair.

Dearborn Heights resident Jake Zelyez offered Friday to tow Almlikye’s car with his pickup. She declined to await aid from her insurance company instead.

Zelyez said he had just helped tow several cars caught up in high waters last month and that the flooding has been problematic there for decades.

“It never gets any better, and they need to do something about it,” he said. “I can’t tell you how many people have had their cars totaled going down this street.”

In Detroit, 10 sewer cleaning trucks had deployed to city neighborhoods Friday morning with a focus on areas where water wasn’t draining through catch basins, Detroit Water and Sewerage Department Director Gary Brown said in a statement.

During heavy storms on June 25 and 26, two pumping stations in Detroit — Freud and Conner Creek — experienced issues that rendered them unable to keep up with the volume of rainfall.

On Friday, the water authority said the Conner Creek and Freud pump stations “continue to operate as designed and with available capacity.”

“Water levels at both pump stations have remained well below the levels that would result in basement flooding,” the authority’s statement read.

The city’s east side was primarily affected on Friday and in June as well as the nearby Grosse Pointe communities.

The water department said earlier this week that more than 24,000 households had submitted flood damage claims following the June storms.

On Wednesday, GLWA announced the creation of a temporary committee to study the June flooding. It will hire an engineering firm and a law firm to report back on the system’s failures. That’s in addition to an internal after-action review. That review has begun and water authority officials said it will take 60 to 90 days.

At least one Detroit cultural institution was suffering from its second dose of heavy rainfall.

The basement of the Motown Museum flooded in June and damaged its elevator. Contractors said it will take several months to fix. Officials had already planned to close the museum in September for the second phase of an extensive expansion plan but on Friday, they said they’ve decided to close the museum now. It will stay closed until summer 2022.

On Friday, the flooding impacted commutes with the Michigan Department of Transportation reporting water across all lanes of eastbound I-94 between I-75 and M-10. Additionally, M-39 experienced flooding northbound at Plymouth Road, according to MDOT, and eastbound I-96 at Grand River and Evergreen had water over the roadway. Both the entrance and exit ramps of I-96 at Davison were also impacted.

Lt. Mike Shaw of the Michigan State Police said late Friday that after several initial road closures early in the day, “we are in a lot better shape” with one shutdown under the TCF Center in Detroit from the Lodge Freeway, which usually tends to flood. The Lodge also was closed northbound at Jefferson, he said.

“We had points on every freeway that had some moments, the usual suspects that flood every time and that’s downtown on I-94, downtown on I-96,” Shaw said. “We also had the Southfield Freeway at Michigan Avenue. That’s also one that floods almost every time. A little bit along the Davidson. Nothing like we had a couple of weeks ago.”

Heavy rain is the morning has left various freeways in the Metro Detroit region with standing water.
I-94 eastbound reopened a week ago after the freeway was closed after flooding, abandoned vehicles and damage to the surface from water and debris.

This article appeared in The Detroit News. For more, click here.