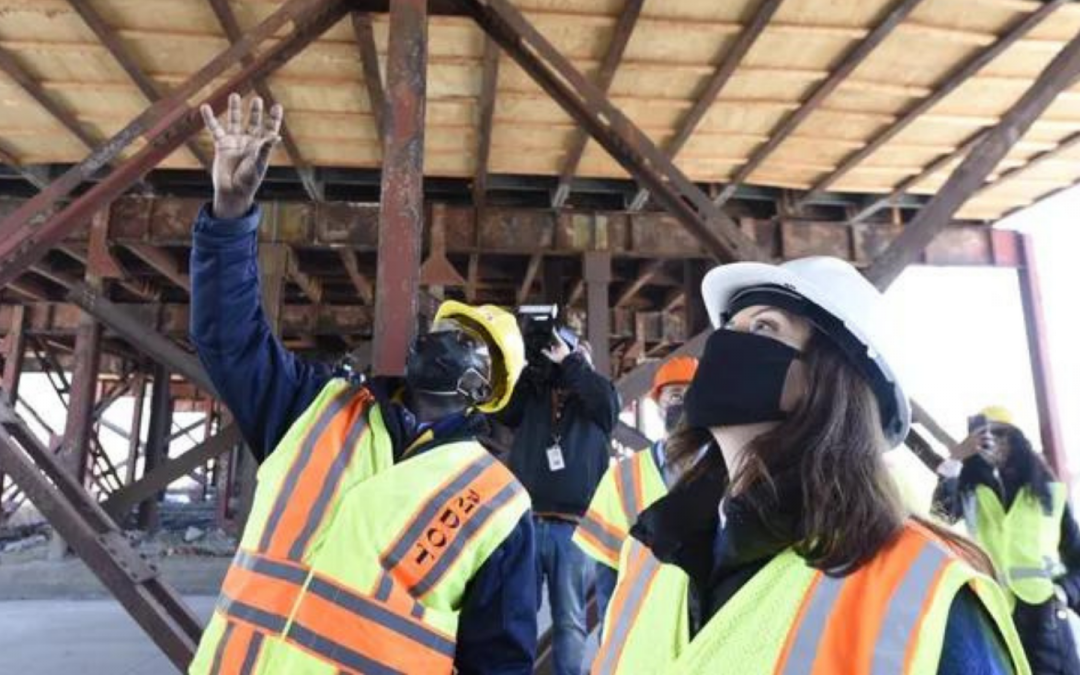 The revised bill is set to be considered Wednesday in the House Committee on Transportation and Infrastructure, which designated $5.6 billion in local projects requested by 319 lawmakers, including 12 of the 14 House members from Michigan.

It’s the first time that earmarks are returning to the highway bill since 2005, according to the Eno Center for Transportation.

The Michigan project drawing the most funding is $20 million toward replacing two bridge spans on Miller Road at Rotunda Drive in Dearborn (submitted by U.S. Rep. Debbie Dingell, D-Dearborn), which Gov. Gretchen Whitmer has visited as an example of important infrastructure that’s failing.

Michigan Department of Transportation Director Paul C. Ajegba points out something to Michigan Gov. Gretchen Whitmer underneath a bridge at Rotunda and Miller Rd. in Dearborn in March. A U.S. House committee is considering approving $20 million to approve the replacement of the Miller and Rotunda Drive bridges.

“We are fortunate that communities all across our district stand to receive these critical funds,” said Tlaib, who also secured funding for four other projects. “Now, my colleagues and I must all work to ensure this legislation is made into law and many of our crumbling roads and bridges are made things of the past.”

Another $11 million is designated for the planning and final design of the Mound Road/Detroit Arsenal Connector project, which is part of the effort to reconstruct nine miles of Mound Road from its intersections with U.S. 696 to State Route 59, according to the office of U.S. Rep. Andy Levin, D-Bloomfield Township.

“The people of Macomb and Oakland deserve safe, navigable roads,” Levin said in a statement praising the announcement. “These projects will not only improve infrastructure in our communities but also create jobs in our communities.”

Macomb County has been patching and repairing Mound Road with county funds and money from Sterling Heights and Warren, the most populated cities, as it awaited federal funding.

Other selected projects span from Inkster to Marquette, Grand Rapids to Grand Blanc. They range from the resurfacing of 12 Mile in Southfield, to bus replacements for Saginaw Transit Authority, to replacing the U.S. 12 bridge over the Coldwater River in Coldwater and pedestrian facility upgrades on the Detroit Riverwalk.

The Democratic-led committee said it received 2,383 total requests for funding for local projects and incorporated 1,473 into the bill, including 1,067 that were requested by Democrats and 403 requested by Republicans.

Michigan lawmakers submitted requests for $344.7 million in earmarked funding for 107 projects earlier this year. Not all projects were designated for funding or received the total amount that the member requested, but many did.

Michigan Democrats got 47 local projects into the bill totaling nearly $128.9 million, while Michigan Republicans got 27 projects totaling $81.6 million, according to a Detroit News analysis.

Two Republicans, U.S. Reps. Bill Huizenga of Holland and John Moolenaar of Midland, did not submit any earmark requests to the transportation committee.

“Michigan’s roads and bridges are in dire need of repair, and I’m glad the House Committee on Transportation and Infrastructure see several of my funding requests as critical priorities for Michiganders,” McClain said.

“I look forward to these projects being included in the final appropriations bill.”

The last surface transportation authorization law to include highway and mass transit earmarks was in 2005. That measure contained $21.7 billion in highway project earmarks including the infamous “Bridge to Nowhere” in Ketchikan, Alaska, said Jeff Davis, a senior fellow and editor of Eno Transportation Weekly.

“This helped push the backlash against earmarks that caused Congress to end them in 2010,” Davis said.

Subsequent surface transportation laws in 2012 and 2015 did not contain any earmarks, he said.

Lawmakers who submitted earmark requests for projects this year had to provide documentation including letters of support from local or state sponsors, its status in the environmental review process and funding sources for the full cost of the project beyond the requested amount.

To guard against self-dealing, members also had to certify that neither they nor any immediate family members have financial interests in the project.