Here are 9 ways to build better roads in Michigan, from old tires to pig poop 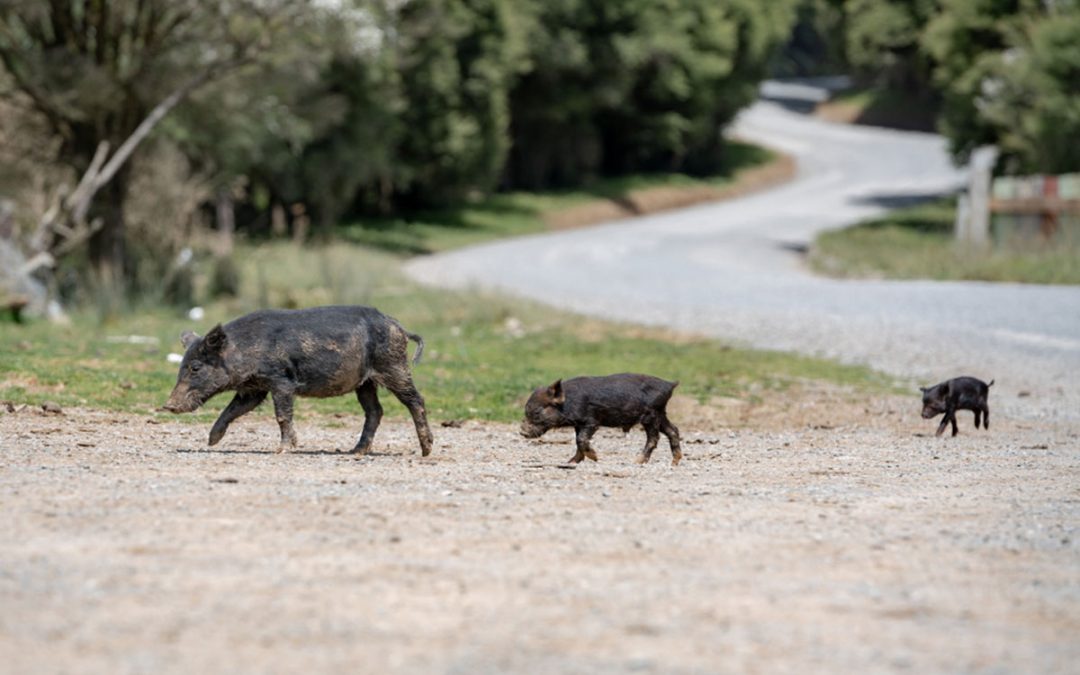 Someday, these materials could be widely used to extend the lifespan of Michigan’s crumbling roads and bridges. Today, they’re emerging in labs and being tested in the real world to see how they hold up to the state’s frigid winters and heavy traffic. Bridge is offering you a quickie guide to promising innovations, including testing taking place at major Michigan research universities.

The desire to prolong the life of Michigan’s roads comes as Democratic Gov. Gretchen Whitmer’s administration tries to drum up support for a $2.5 billion road-funding plan that is promised to get 90 percent of roads into good or fair condition by 2029. Republican legislative leaders have so far rejected Whitmer’s proposal — centered on a 45-cent-per-gallon gas tax increase phased in over a year — but have not yet unveiled an alternative plan for raising the money needed.

Separately from funding talks, the Michigan Department of Transportation has invested years of research on building longer-lasting roads and bridges and improving traffic safety.

Michigan spent $5.5 million of mostly federal funds on research in 2018. Up to 60 research projects are ongoing at any given time, said Carol Aldrich, MDOT’s engineer of research.

To be clear, none of these emerging ideas will end potholes. But they will hopefully lower total maintenance costs over the lifespan of roads and bridges. That’s the goal, anyway, with the state road agency making educated guesses on which materials or technology show enough promise to pursue. That means patience, as the outcome of some tests won’t be known for years, when tested pavement begins to wear down.

“The reality is, if there was a magic elixir, I think we would have found it and be using it nonstop by now,” said Matt Chynoweth, MDOT’s chief bridge engineer.

“We would love to build a road that would last forever with no maintenance, but that’s just not possible. We’re always looking at ways to make them last longer.”

Cost is another challenge, with new materials or processes often costing more than conventional construction.

“You have to be very careful running out there spending taxpayers’ dollars,” MDOT Director Paul Ajegba told Bridge. “If it fails, you lose credibility. And we are very careful of that.”

Here are some options for Michigan:

Traditional concrete, while strong and relatively inexpensive, cracks easily under pressure. Li, a civil and environmental engineering professor at the University of Michigan in Ann Arbor, wanted to develop an alternative that gives under pressure to prevent cracking that eventually leads to potholes.

Called engineered cementitious composite, or ECC, it has been used in a few bridges around Ann Arbor, as a patch repair and as a replacement for a steel expansion joint that allows the bridge to expand and contract in different temperatures.

One appeal of his material, Li says, is that while it cracks, its cracks are small. Lab tests also have shown the bendable concrete can mend itself, he said.

“Water finds it very, very difficult to penetrate,” he said.

Chynoweth, of MDOT, said the department needed to cover the bendable concrete with an epoxy sealant to deal with the cracks.

Researchers in the Netherlands are exploring the idea of asphalt that can heal itself, by applying heat.

Erik Schlangen of Delft University is leading experiments on several roads in which steel fibers are added to bitumen (a binding agent) in the asphalt, which allows the asphalt to conduct heat. They then run a large induction machine over the road, melting the bitumen, and closing the cracks.

This is promised to double the lifespan of the tested roads, though the experiment is still too early to yield definitive results. Another self-repairing road project is being tested in China.

Adding rubber to asphalt to increase the lifespan of pavement isn’t a new idea. But researchers at Michigan State University are developing new technologies to mix the rubber — using recycled scrap tires.

By this summer, the project — known as crumb rubber modified asphalt — will have been tested in nine local road segments in Ingham County over the past decade, said M. Emin Kutay, an associate professor of civil and environmental engineering at MSU.

Scrap tires are shredded into a powder-like substance. Researchers use different methods of combining the rubber with asphalt.

Rubber has potential as a road additive because its flexibility could help slow cracking in asphalt, Kutay said. And keeping tires out of landfills has environmental benefits.

It hasn’t yet been determined whether Kutay’s rubber mixes will lead to long-term improvement in pavement life, in large part because the test material hasn’t been in place long enough to yield definitive results. The cost to build a test segment also is higher than using regular asphalt, but that cost has come down significantly from the earliest testing — from roughly twice as much as regular asphalt, to about 5 to 10 percent higher.

“That was one of the goals,” Kutay said. “In my opinion, that was a big success of this entire research program.”

Previous attempts at testing rubber in asphalt haven’t been successful, Bleech said. In past tries, rubber was ground into pellets too large to properly melt into the asphalt.

MDOT has used asphalt enhanced with polymers for years, Bleech said, which improves the life of pavement over traditional asphalt. MDOT hasn’t ruled out future use of rubber additives, he said.

“We just don’t have any conclusive evidence that it’s any better than what we currently use,” he told Bridge.

Michigan’s freeze-thaw winters can be harsh on infrastructure. Road salt used to melt ice, for instance, can seep through cracks in concrete bridge decks and splash up onto support beams. That can cause steel reinforcements inside the beams to rust.

In the 1990s, Nabil Grace, dean of the College of Engineering at Lawrence Technological University in Southfield, teamed up with Japanese researchers to develop carbon fiber strands to replace steel as bridge components.

Carbon fiber is about 20 percent lighter than traditional steel, and doesn’t rust.

The technology was deployed on a bridge in Southfield in the early 2000s, and since has been used in about a dozen bridges in the state, said Chynoweth, of MDOT.

Michigan now is working with three other states to come up with the next generation of carbon fiber material using thicker strands to support even more force, Grace said.

The company had received more business leading up to opening the Michigan facility, though shipping by sea from Japan takes a month or more, said Yoshiaki Yamamoto, director of Tokyo Rope International Inc. in Japan and chairman of Tokyo Rope USA. Air shipping is too costly, he said.

MDOT is the company’s largest American customer. “We thought it’s better to have a factory in the United States to meet with customers,” he said, adding its longstanding relationship with Lawrence Tech was another factor.

Like many emerging materials, the cost of the carbon fiber is more expensive up front, but Grace and Yamamoto said the goal is to reduce the total lifecycle maintenance cost of a bridge to up to 100 years.

“We are always looking for proven technology. The carbon fiber one is a good example of where MDOT is leading the charge,” Ajegba, MDOT’s director, said. “We’ve committed to continuing to expand this technology on all our bridges.”

A $1.2 billion road-funding package legislators adopted in 2015 included a requirement that MDOT develop roads that last for 50 years. Generally, pavements are built to last 20 years.

MDOT is completing projects this year to build two road segments designed for 30 years, and another two designed to last 50, near Grand Rapids and Flint. Each of the 30- and 50-year road test areas will include concrete and asphalt surfaces.

Building roads to last longer than 20 years requires higher-quality materials, including aggregates, asphalt and concrete, as well as improved road base and drainage systems, Bleech said. The road base on longer-lasting roads is between 1 to 2 feet thicker than standard roads, he said, which provides better support for the pavement.

MDOT estimates the cost to build 30-year roads would be 25 to 50 percent higher than a 20-year road, while the 50-year road could cost 75 percent to 100 percent more than the standard design — a potential longer-term cost savings, but one that carries a higher initial price tag, which would leave less funding available for other road projects.

One reason roads aren’t designed for longer than 20 years is because it’s hard to predict future traffic patterns and trends, Bleech said; what’s designed today could be obsolete within a few decades.

“We can’t just say, ‘Well, no, we’re not going to try long-life pavements, because we know we’re going to be driving (vehicles from The Jetsons cartoon) 20 years from now,’” Bleech said. “We have to still prepare.”

Dow, a subsidiary of newly formed DowDuPont Inc., tested recycled plastic mixed into asphalt on roads at its facility in Freeport, Texas. The company says the material weighs 1,686 pounds, or roughly the same as 120,000 plastic grocery bags.

The company said in a news release it is monitoring plastic-infused roads to identify improvements for different climates and environmental conditions. The company also highlighted the environmental benefits of reusing plastics for other purposes.

Bleech, of MDOT, said the state has met with Dow leaders, including earlier in June, to talk about how it might be incorporated into Michigan roads. One idea is to test it on a driving track used by Michigan State Police.

“(Dow is) not 100 percent positive, but based upon their work in Texas, they believe that they can meet our specifications,” Bleech said. “It’s a matter of them getting an asphalt cement producer to use their methodology, and then incorporate it into our hot (asphalt) mix.”

Dow officials did not respond to a request seeking comment.

A British company, Tarmac, markets a permeable concrete it says can soak up to 1,000 liters of water a minute per square meter of surface, making it attractive in places that experience flooding.

MDOT has not yet reviewed its use on roads, Bleech said. Permeable pavement, more generally, has been used in parking lots on some college campuses, including Grand Valley State University and Central Michigan University. But there are concerns that such a surface would crack as it freezes and thaws in Michigan winters, especially if water doesn’t drain properly, he said. There’s also the matter of the upkeep required to keep dirt from clogging the drainage system.

Researchers in other states are looking at using more recycled materials in roads, including biological materials such as corn cellulose or microalgae to remove petroleum from asphalt, which would help the environment.

Bleech said replacing petroleum with natural substances would reduce the state’s carbon footprint — and emissions — by reducing the need to refine petroleum. He noted research into using pig manure to replace petroleum in asphalt.

MDOT also has considered using recycled shingles, which contain asphalt, in roads. The state tested it in a park-and-ride lot in Lowell a few years ago, Bleech said, and while he said it’s too soon to tell whether shingles will increase pavement life, it is more ecological to reuse byproducts that otherwise would wind up in landfills.

While an interesting idea, “we found that the available quantities of this stuff are not there for really big jobs.”

If road contractors have to source small amounts of material from multiple locations, rather than from one place, he added, “it kind of discourages them from using it.”

Roads that can prevent ice

Some scientists, including in Turkey, have studied ways to slow ice formation on roads, which could be a benefit in wintry climates.

Those ideas have already made it to market: Cargill Inc., based in Minneapolis, sells products that mix with asphalt to keep ice from sticking to the roads and another applied to pavements that can store and release deicing materials.