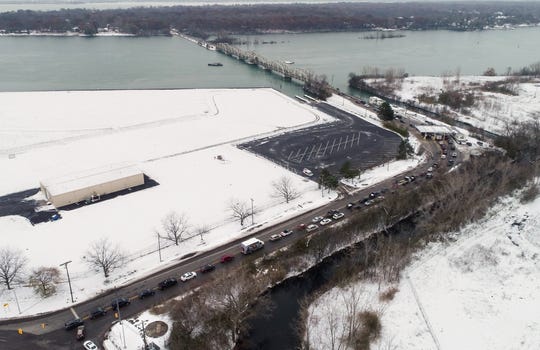 Grosse Ile resident Mark Lane says his 16-year-old daughter was cut off, flipped off and yelled at in a road rage incident after Wayne County abruptly closed one of only two connections to the largest island in the Detroit River, lengthening commutes by an hour or more for thousands of motorists.

Paul Smoke — owner of Grosse Ile Bridge Company, the sole open bridge — said one driver fed up with the gridlock deliberately ran into a bridge worker, injuring the worker.

And it’s only the first week.

“People are outraged. It’s a major problem, and the township needs to come up with a plan immediately before someone gets really hurt,” Lane said. “My daughter and wife were both separately raged at and felt threatened. It’s an absolute free-for-all. Come on, what is going on?”

The bridge’s closure is emblematic of Michigan’s crumbling roads and bridges infrastructure, which has been Gov. Gretchen Whitmer’s main focus and a topic of infighting in Lansing between the executive and legislative branches.

Township officials said the county called Wednesday afternoon and said the bridge would be closed at 7 p.m.

“Unfortunately, we found out through a back channel they needed to close the bridge for safety reasons,” Grosse Ile Township Supervisor Brian Loftus said. “The good news, if there is any, is the township staff — I’m real proud of the staff — with almost no notice we contacted every agency.”

In addition, he added, the township reconfigured stoplight timing and even alerted the owner of the private Grosse Ile Toll Bridge, the only other way on and off the island, that, “he was going to have a lot of traffic real soon.”

Loftus, who was out of town Friday, said he expected to learn more next week when township and county officials are planning to meet to discuss bridge damage and what to do about it.

Whitney Lewis, the communications director for Wayne County’s public services department, said a consultant’s inspection that occurred about three months ago uncovered deterioration on the deck part of the bridge and prompted the emergency closure.

It took time for the consultant to analyze and share the findings with the county. A visual inspection alone, she said, was insufficient to determine that there was a safety concern.

Moreover, she said, the consultants have a set number of days to submit their report, and the county is still awaiting the recommendations on how to fix the concerns. It could take weeks, even months, before the bridge is re-opened.

Officials, she said, had no choice but to completely close the bridge.

Navy Verma, who lives on the island, said he has spent an extra hour in traffic every day since the bridge closed. He added that he’s worried about what’s to come as the holiday season approaches.

“I’ve been having to plan my entire day differently. If this keeps up, an hour a day, every weekday — that’s a lot of time lost,” Verma said while sitting in traffic, before getting honked at and driving off to make the green light on West Jefferson Avenue and Bridge Road.

The closure could cost residents potentially hundreds of dollars more a month in tolls.

Smoke, the bridge owner, says he urges residents to buy an express bridge pass, as it allows for three times the time efficiency and is cheaper than paying with cash or card each time.

He warns, however, that because of the sudden influx of bridge pass applications, there may be a delay in receiving it.

“We have extra people on hand. We’re doing what we can,” Smoke said. “There are three employees working on applications for 12 hours a day, and it’s a tedious process. We ask everyone to please be patient.”

Lane, the Grosse Ile resident, said the bridge company told him he would have to wait a week before receiving his pass.

“So here I am, stuck in the longer, slower-moving line,” he told a Free Press reporter he let sit in the passenger seat of his SUV while maneuvering through traffic.

A Riverview Police sergeant — who was helping a bus make a wide right turn after just being cut off by another driver — told the Free Press a police presence helps calm people down.

“When I’m here, people are more careful and courteous. We are trying to prevent road rage and accidents,” he said. “Every day people are getting more used to the situation. It’s like the first snow of the year — people forget how to drive and then get used to it as the days go by.”

Smoke agreed that things will get better as people grow accustomed to the bridge closure, but he said, “Riverview Police Department isn’t doing anything for traffic enforcement.”

About 10,000 people live on the island, and the closure affects Wayne County, which owns the public bridge; nearby communities, such as Trenton and Riverview, and the private toll bridge company.

The parkway bridge was mentioned in a Free Press investigation that concluded the poor condition of Michigan’s infrastructure is reaching a crisis point, with an estimated replacement cost of $406 million for bridges in Wayne County alone.

The Grosse Ile Parkway bridge, which was built in 1932 and reconstructed in 2007, had been weight-restricted to 26-ton vehicles — a loaded garbage truck — with more than $5 million of repairs scheduled to start next year, officials said.

Initially, plans called for reconstruction work to begin on the bridge in one phase now and a second one later.

But, Lewis said, the project bids were over budget, so it was put on hold.

Longer commute times, which have sparked frustration, were such a problem Thursday that Grosse Ile Township Schools postponed its 4 and 5 p.m. middle school boys basketball games because athletic officials were concerned that participants wouldn’t be able to make it on time.

The privately held Grosse Ile Toll Bridge currently costs motorists $5 round trip to cross — $5 to enter the island and no charge to leave. Express passes are $4 round trip and can be purchased online at grosseilebridge.com.

When both bridges are open, the Grosse Ile Toll Bridge receives 20% to 25% of traffic, Smoke said.

In the past two days, Lewis said, she received several calls from frustrated residents.

It’s unclear, Lewis said, how long the bridge will be closed. The county, she added, has been trying to alleviate traffic congestion. But, it is unclear whether more can be done to offer relief to residents who must now pay a toll to get on and off the island.

But, officials said, after the span is repaired and re-opened, additional, and extensive, construction work is expected to begin sometime next year and residents will be facing a similar situation.

What you need to know

How long: The bridge will be closed indefinitely

Tolls: $5 round trip to cross, $5 to enter the island and no charge to leave.