The Great Lakes are being poisoned by poop 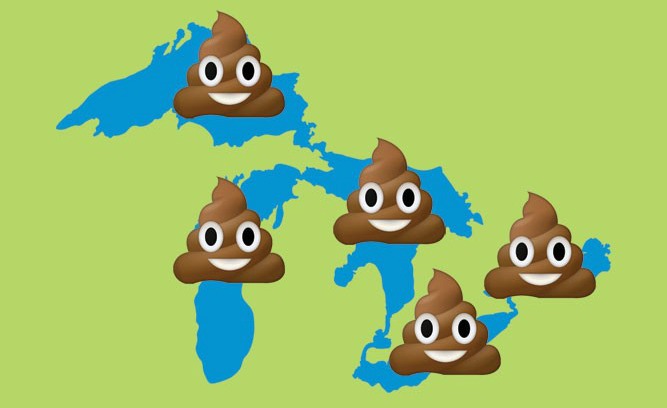 Pam Taylor, a woman I admire a great deal, lives in a rural community in Lenawee County, not far from the Ohio border, a place where her family has been farming since 1837.

You wouldn’t call her lifestyle wild and crazy. A retired teacher in late middle age, she celebrated Memorial Day by taking her 88-year-old dad to a parade in a nearby small town, and driving him to visit family graves in nearby cemeteries.

“Then we will get some barbecued chicken at the Blissfield American Legion, and we’ll have the strawberry shortcake I’m going to make today,” she said the day before.

Yet not only Detroit’s comeback, but our very long-term survival, may depend on policy makers finally listening to her.

Taylor is one of the main authors of a new report, “A Watershed Moment,” published late last month by several groups and led by the one for which she is a full-time, unpaid volunteer: Environmentally Concerned Citizens of South Central Michigan. Barely seven pages long, the report presents ample evidence that our water supply is being slowly poisoned.

Poisoned, that is, by an astonishing 3.3 billion gallons of animal poop and urine produced every year by Michigan’s 272 factory farms, which technically are called CAFOs, for “Concentrated Animal Feeding Operations.”

These are places where nearly 21 million animals are kept in close confinement, usually in almost unspeakable conditions, being fattened as fast as possible for slaughter.

Many of these animals never see the sun or spend a moment outside. What they do before they die is eat, piss, and poop, and most of what pours out of them is kept in huge cesspools bizarrely called lagoons. Eventually, most of this stuff gets mixed with water and spread on fields as fertilizer.

That’s where the problem starts.

We aren’t talking about bacteria, diseases, and germs, or even horrible odors. The problem is simply phosphorous.