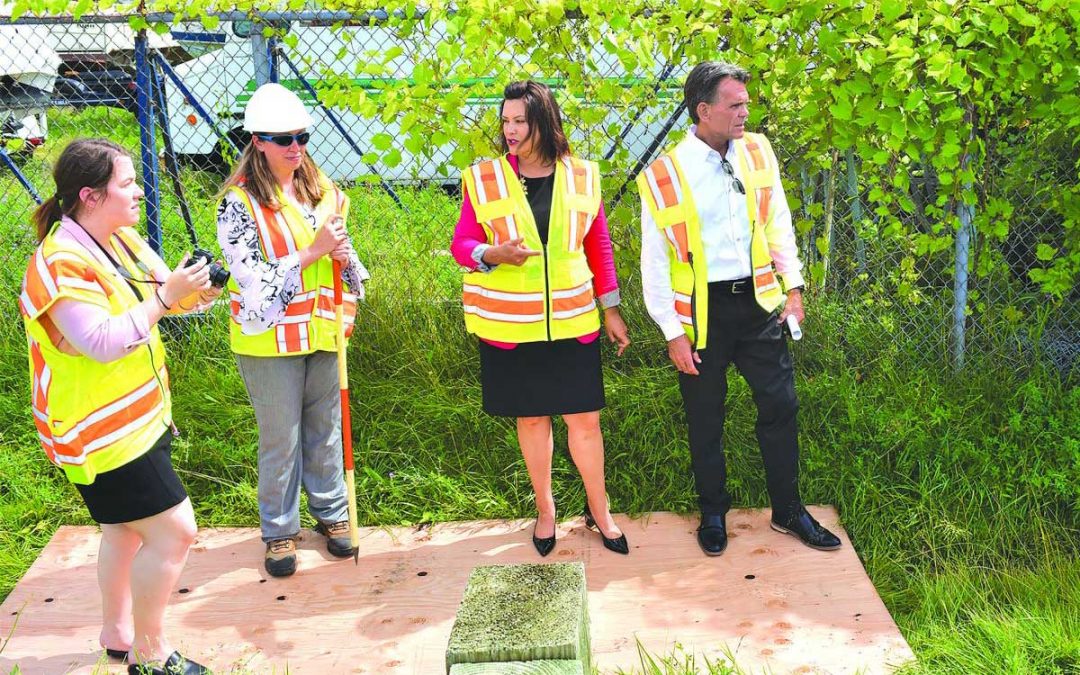 Gov. Gretchen Whitmer paid a brief visit to Harrison Township on July 22 to get a closer look at the crumbling South River Road bridge.

After touring the 45-year-old bridge, Whitmer, who was joined by Macomb County Executive Mark Hackel and representatives from the Michigan Department of Transportation, spoke out about her concerns over the myriad bridges across the state in dire need of attention and funding.

“This is a peninsula, and if something happens to this bridge, these businesses and homes would be cut off,” she said. “It’s a public safety issue.”

Fixing the state’s deteriorating roads was the focus of Whitmer’s campaign last year. She previously proposed a 45-cent gas tax hike to improve roads and bridges like the South River Road bridge.

“I don’t want to pay more in gas taxes, but this is a dangerous situation,” Whitmer said. “What if someone drives over this bridge and a piece of concrete comes loose and hits someone or hits a windshield?”

The South River Road bridge, built in 1974, is slowly breaking apart from the bottom.

Either side of the bridge has been dotted with orange barrels for more than a year, and it is traveled on one vehicle at a time. The Michigan Department of Natural Resources and the Macomb County Sheriff’s Office Marine Division are both located where the road comes to an end.

Whitmer has been touring Michigan bridges in an attempt to see the issues for herself and determine what can be done to save them.

There are 447 bridges in critical condition and another 1,100 in need of repair. Sixty-two bridges in Michigan have already been closed.

Hackel said there’s a simple solution to the bridge problem — funding. “The bridges can be fixed if the funding is there.”

He said he’s not against Whitmer’s gas tax hike proposal, but it isn’t enough.

In May, Hackel announced that $2.3 billion in funding is needed to fix all 1,278 lane miles of poor roadway and 39 deficient bridges under the county’s jurisdiction. Macomb County is responsible for maintaining 1,773 miles, or 44%, of the total 4,045 miles of roads in the county, including residential roads in townships. Of those county-maintained roads, 42% are in poor condition, Macomb County Department of Roads officials said.

This year, Macomb County will receive $70 million from the state in Michigan Transportation Funds for road repairs and reconstruction.

Harrison Township Supervisor Ken Verkest said concrete and steel bridges in Michigan, not unlike the roads, experience wear and tear due to time and the elements. However, bridges get hit a bit harder. He said MDOT inspectors regularly assess the bridges and are able to predict any potential hazards.

“Water, humidity, salt and freezing — all of that is tough on bridges,” Verkest said. “Bridges freeze over faster than roads.”