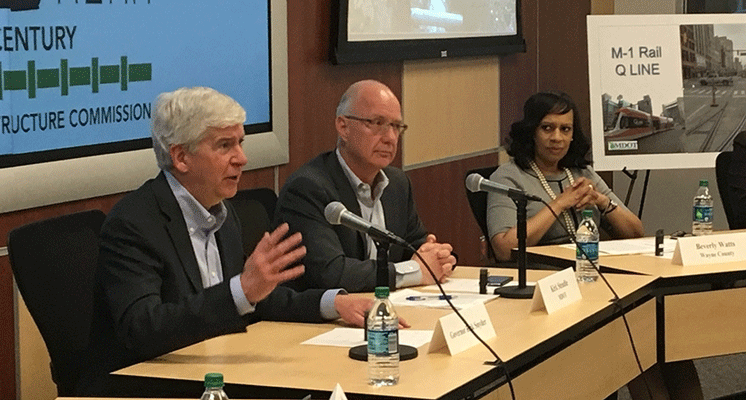 “Modern infrastructure is critical in ensuring Michigan is on a solid path toward our future,” Snyder said. “This collaborative regional pilot is key to improving our statewide infrastructure and will help make Michigan a national leader in infrastructure asset management and planning.”

Two announcements on the same plan — one in Coppersville, and the other in Detroit — offered a grand vision of how this plan could work, but few specifics, such as how much the pilot would cost and exactly who would have access to the valuable, yet sensitive, information once it was in the system.

“We need to invest more in infrastructure,” Snyder said, after taking a quick tour of the Michigan Department of Transportation offices in downtown Detroit, which showed how the state already is mapping stretches of Woodward and Van Dyke in metro Detroit. “But, we need to do it more efficiently.”

In Coopersville, on the state’s west side, the governor visited Continental Dairy and also talked about his plans.

Part of the challenge is that much of the state’s infrastructure is aging and in the ground, so it’s not visible.