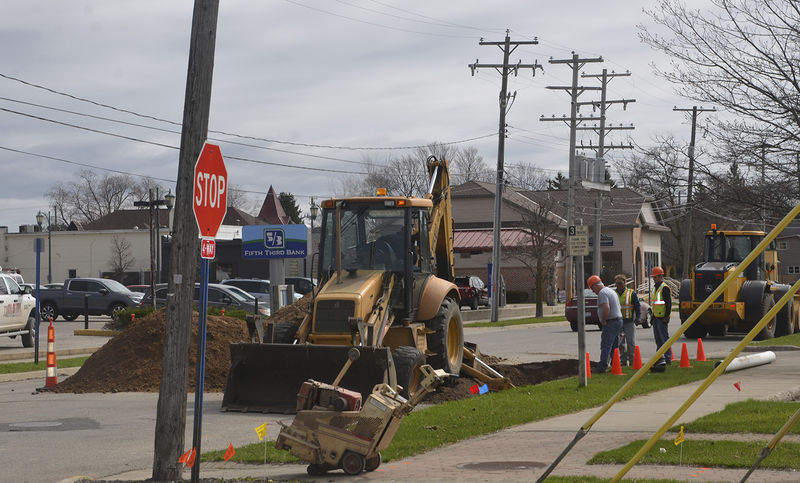 GAYLORD — As spring has emerged in the area, downtown Gaylord is getting a facelift — both on the surface and beneath the surface.

Joe Duff, Gaylord city manager, said the downtown development project work on two blocks of South Otsego Avenue from Main Street to Second Street is on schedule and expected to be completed by Memorial Day weekend. The work, which began in mid-April, has forced a detour.

The construction project includes new underground water and sewer mains and leads, curb, gutter and sidewalk, new streetlights and a new road surface. Duff said that this week, a sanitary sewer replacement on South Otsego was completed Tuesday with storm sewer reconnections taking place Wednesday. Curb work was expected to take place later this week. Streetscape work on Main Street is also expected to ramp up in the coming weeks.

Once work on Otsego Avenue is completed, underground work on First and Second streets will begin with the need to have it finished before Alpenfest, July 11-15.

The televising revealed a collapsed sanitary sewer late last month just east of the intersection of First Street and Court Avenue. Crews were on scene to repair the sewer last week.

“As we were televising and cleaning the line, we found the condition of the sewer was concerning to us,” Duff said.

Through that process, the city determined the sewer line on First from Otsego to Court was suspect, with noticeable deterioration.

Gaylord City Council approved $80,492.80 for the project on First Street, which includes the sewer replacement as well as the continuation of the water main at the intersection of South Otsego and First one block east to Court.

Also, the city determined the sewer line on Second Street from Otsego Avenue to Michigan Avenue was a possible weak link, and the increase in activity of businesses in that area coupled with the fact it is currently a “flat” sewer, led City Council to approve $39,352.90 worth of work to replace the sewer on Second from Otsego to Michigan.