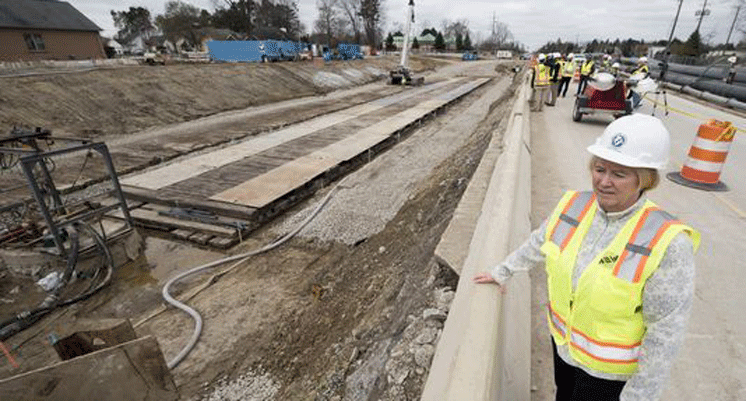 Construction of the bypass for a sewer line that collapsed Christmas Eve and caused a massive sinkhole on 15 Mile near Hayes Road in Fraser has been completed.

“That bypass has now been essentially completed in the last couple of days,” said Candice Miller, Macomb County Public Works commissioner, on Wednesday. “We are now running all of the sewage through the bypass. It’s no longer going through the collapsed interceptor.”

Now it’s on to repairing the sewer line, which requires digging for a repair shaft. That work has begun, she said, and is expected to take about two months.

Crews will build a kind of cage around the broken pipe, Miller said, which will allow them to remove the line and the contaminated dirt, and install a new line.

She said residents in the area won’t have to worry about another collapsed sewer again once repairs are completed.

“Ratepayers will know we’re not going to ever have another sinkhole here ever,” she said.

Miller said the bypass comprises about 6,000 feet of pipe than runs along 15 Mile parallel to the sewer. It has eight pumps that move sewage around the broken portion of the line, she said.

She made the remarks during a news conference outside the Fraser Activity and Senior Center on 15 Mile near the sinkhole. Fraser Mayor Joe Nichols and staff from the commissioner’s office joined her.

As a result of the fixes, she said her office is easing water restrictions it placed on customers served by the sewer line.

“We’re in pretty good shape now, but use your common sense,” she said.

Miller also reiterated her plea for residents to avoid using flushable toilet wipes. She said the wipes aren’t biodegradable and are clogging the bypass’ pumps.

Nichols praised Miller and her office for they’re work to repair the sewer and sinkhole. “They’ve done an amazing job,” he said. “We’ve come very far in a short time.”

The county has hired a company to conduct an inspection of the entire sewer line, about 17 miles of pipe, using high-tech robots equipped with cameras and radar systems. The inspection is expected to take about four months to complete, she said.

Last month, the county awarded a $32.7 million contract to repair the sewer.