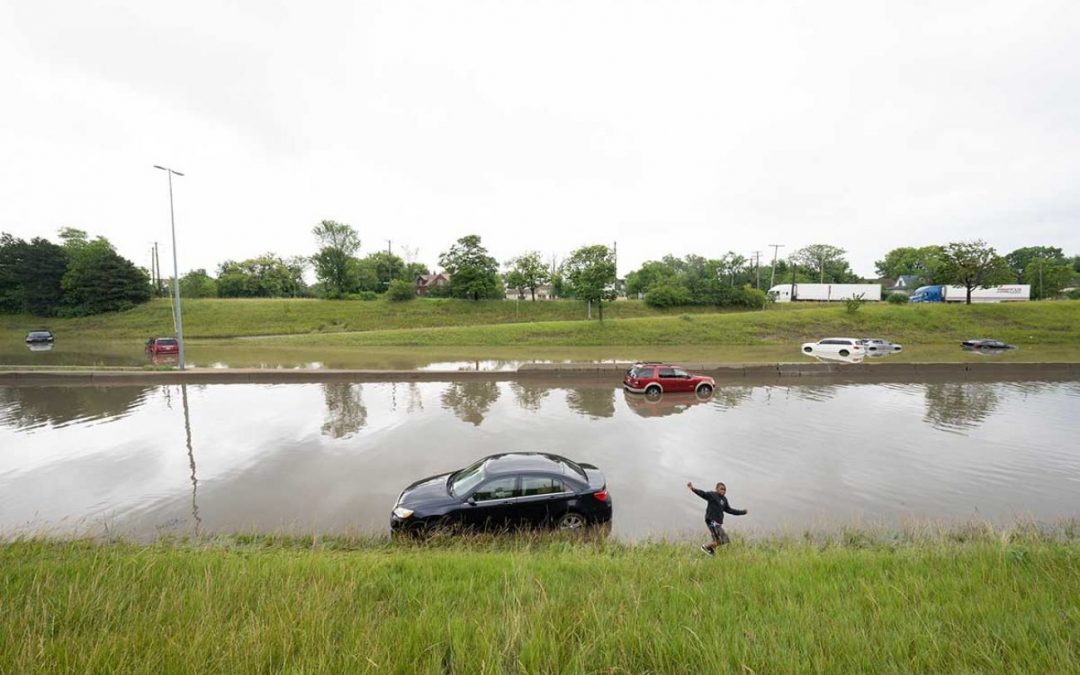 When Cierra Mangal answered the phone at 2:45 a.m. Sunday morning, she had no idea how much rain had hit Detroit or that the water was still rising.

“The water had to be at least three-and-a-half to 4 feet high,” she told BridgeDetroit on Monday. “It was ridiculous.”

Mangal, a marketing professional in Detroit, was answering calls from her grandmother, who lives in a senior living apartment complex on Detroit’s eastside. Mangal said her grandma, who is in her 70s, was scared and wanted to escape her flooding first-floor apartment. The grandmother had called the site manager, the fire department and the police — but the lines were busy, and Mangal, her emergency contact, was the first to respond.

Detroit saw almost 6 inches of rain, inundating the city’s infrastructure and water sewage systems, forcing the governor to declare a state of emergency. Freeways, neighborhood streets, homes and businesses flooded. Cars were abandoned in swamp-like rivers along the freeway while parked vehicles drifted down city streets, carried by the stormwater filled with tree limbs and debris.

Piles of trash continued to line block after block of neighborhood streets, and some homes are still without air-conditioning, power, and hot or clean water. The City also reported a water advisory for Morningside, East English Village, and Cornerstone Village neighborhoods due to brown, rusty water in taps and toilets.

How could just a few inches of rain upend an entire city? Aging infrastructure and climate change, according to City and State officials, who praised Detroiters for their ongoing tenacity to contend with calamity. But crisis after crisis with temporary fixes is an old story for longtime Detroiters who say solutions are long overdue.

“The residents of Detroit deserve better, and they need better,” Mangal said. “If you guys aren’t the leaders that we thought that you are, it’s time to put some new people in new seats.”

The City of Detroit addressed the floodwaters in a press conference last weekend, followed by another with Gov. Gretchen Whitmer on Monday. Thunderstorms are expected through the end of the week, making some homeowners fearful of continuous damage.

“This storm completely overwhelmed the design of the system,” Mayor Mike Duggan told residents during Monday’s press event. The mayor said the rainwater was an “event of historic proportion,” resulting in 2,800 calls about basement flooding from Detroiters on Sunday.

The city has asked residents to be patient while it develops a plan to present to the federal government for funding and to assist with volunteer efforts. Duggan warned that the Federal Emergency Management Agency (FEMA) aid may not arrive for several weeks. He suggests that residents who can afford to replace items and repair their homes should do so immediately, save the receipts, and wait to get reimbursed. The mayor told residents that bulk pick-up would be made available in the meantime, and it has already begun in some neighborhoods.

Mangal, who lives on Detroit’s westside in the Grandmont neighborhood, said it took her an hour to get to her grandmother’s apartment Saturday morning. She tried to drive down I-96, but said the water was too high, so she was forced to take an alternative route along Grand River Avenue. Mangal said she saw cars driving up the down ramps from the freeway as water levels continued to rise.

“I felt very unsupported by any of our City officials or any of our emergency response teams,” she said.

Mangal said she was frustrated and nervous at how long it took to physically reach her trapped grandmother.

“It was a very overwhelming and scary and frustrating experience, for sure,” she said.

There’s only one way in and out of her grandmother’s senior apartment complex, and the entryway was flooded with several feet of murky water by the time Mangal arrived. Inside, Mangal’s grandmother told her a foot of water had been on the floor, leaving residue on the lower half of the wall and squishy, smelly carpet.

Russ Bellant, who retired from the City after working for the Detroit Water & Sewerage Department (DWSD) and later conducted multi-departmental training, said the city has used an inadequate water pump system for years. He said the Great Lakes Water Authority is “negligent in their responsibility to have high performance systems in place.”

Though Bellant said there are temporary situations where water can be overwhelming, the City still should have been better prepared.

“Whether it’s the mechanical elements of the pump or whether it’s the power supply to the pump, I do not know,” he said. “But the reason I know it isn’t working is simply because of the flood conditions that persist.”

Bellant said Detroiters need to know that the sewer lines run from Detroit’s northern suburbs down to areas like East Jefferson Avenue, where water is likely to pool. Bellant also said that residents should be warned not to wade through floodwaters, but if they must, they should wear protective equipment.

According to Bellant, when the Conner Creek pump station on Detroit’s eastside fails, “people’s basements become the reservoir.”

“It’s very unpleasant and unfortunate, and there’s either not enough being done or they’re trying to collect more neighborhood voices,” he said. “But the important people aren’t listening because they don’t want to, it’s not important to them.”

No single government or corporate entity is responsible for the flooding, and fixing the issue will require navigating a quagmire of entanglements and eventually support from the Legislature. Technically, the Department of Transportation manages the pumps that unclog water from the roads. DTE runs the power source to operate the pumps, which are owned by the City but have been leased by the Great Lakes Water Authority since the Detroit bankruptcy.

Bellant suggests greater investments in additional storage capacity to prevent future flooding. He says retention basins, like the ones in the River Rouge area, and power backups could produce maximum efficiency in the city’s sewage systems. Bellant also suggests that residents clear fallen tree limbs and leaves to prevent backups in neighborhood drains.

The Great Lakes Water Authority is the regional water and wastewater treatment service provider in southeast Michigan. GLWA has a 40-year lease with the City of Detroit to provide services like wastewater conveyance and water treatment.

Water authority representatives said the regional system was working within “capacity limits” over the weekend.

“While there was a brief interruption of service at the Conner Creek Pump Station on Friday, it was quickly repaired thanks to the hard work of GLWA team members and had limited impact on flow into the system,” Michelle Zdrodowski, chief public affairs officer told BridgeDetroit on Monday.

Gov. Whitmer told Detroiters on Monday that the flooding is due to “decades of underinvestment in infrastructure,” which she has said she plans to tackle through the state Legislature — but Michigan also needs federal assistance.

Frustrated — the need for new infrastructure

Gary Brown, director of the Detroit Water and Sewage Department, said Detroit has more than 3,000 miles of sewer lines, but those lines were built over 100 years ago. In recent years, Brown says the City has added $1.5 billion in retention basins and construction along both rivers to prevent flooding. DWSD serves more than 230,000 accounts across 2,700 miles of water main systems.

The City is expected to begin construction on a $95 million stormwater system in Rouge Park, accompanied by a $750 million commitment from the Great Lakes Water Authority in sewer system improvements over the next five years.

Brown said the citywide flooding was “not due to a maintenance issue,” even though pump systems failed.

Brown said the pumps that support the city’s drainage systems were down for two hours over the weekend due to power outages and that it’s unclear the amount of water that remained on city streets during that time. Brown told Detroiters during Monday’s press briefing that all seven pumps were in working order again at the start of the week and that the greater issue was climate change.

In the meantime, Detroiters want more from officials than a climate change pivot.

“Well, Gary Brown said it was global warming that caused this to happen, and that is so off the mark,” said Jacqueline Richmond, who lives in the Jefferson Chalmers neighborhood.

Like many Detroiters, Richmond’s basement flooded over the weekend. Richmond, 62, said the water reached the stairs leading up to the first level of her home. In years past, like 2014 and 2016, when Detroit saw similar flooding issues, her family and neighbors had costly damage and needed to replace water heaters, furnaces, sump pumps, washing machines and dryers.

Richmond said global warming and climate change may cause heavy rain, but it’s the old infrastructure that causes the flooding in her basement. Her home, originally owned by her parents, was built in 1929. Richmond said most of the homes in her neighborhood have clay pipes that have cracks and need to be replaced. When she reached out to the water department about puddles of water constantly forming in front of her home, she said they did an assessment of the property. Richmond said she was told the nearest drain was around the corner and down the street from her house.

“I was like, ‘Wow, I must have some pretty smart water for it to know to go all the way around the corner to go into a drain.”

In the two hours that Brown said pumps were out of service, river-like conditions appeared on Detroit freeways. The issue of aging infrastructure on top of property tax overassessments, water affordability issues, and a lack of widespread housing support in the city has weighed on Detroiters.

“It was horrific, I’ve never seen anything like that before in my life,” Mangal said, who made two trips on Saturday to save her grandmother and gather her belongings until it’s safe to be in the apartment again.

“I think that people are really frustrated and want to know what happened. They want to know why, and why no one alerted them that this was happening, especially in a city that’s dominated with Black people. It’s like, why do we continue to experience all these hardships while our leaders are sharing these messages of empathy and messages of hope. Well, where’s the action that backs those messages?”

Mangal said she is glad to hear that the City has planned action steps and that the governor declared a state of emergency, but she wants to see reliable, timely communication and transparency to residents.

Detroit was granted federal aid to rebuild from the coronavirus pandemic. City Council approved Duggan’s plan on Tuesday. The money will go toward budget shortfalls and community investments through City services.

“They have put Band-Aid after Band-Aid on it. It is time to rebuild the whole thing. But they don’t want to put the money in because it’s going to cost a lot of money,” Richmond said. “You got $826 million (in federal American Rescue Plan Act funds). What are you going to do with that money besides put it in your pocket? I’m sorry if I sound harsh, but that’s the way I feel.”

Frustrated, and worried about the incoming storms headed to Detroit this week, Richmond said she hasn’t forgotten that 2021 is a mayoral election year.

“If you do not come up with a plan to fix our infrastructure, do not come up to my door, knocking on my door asking for my vote, because you’re not going to get it,” Richmond said.

This article appeared in Bridge. For more, click here.