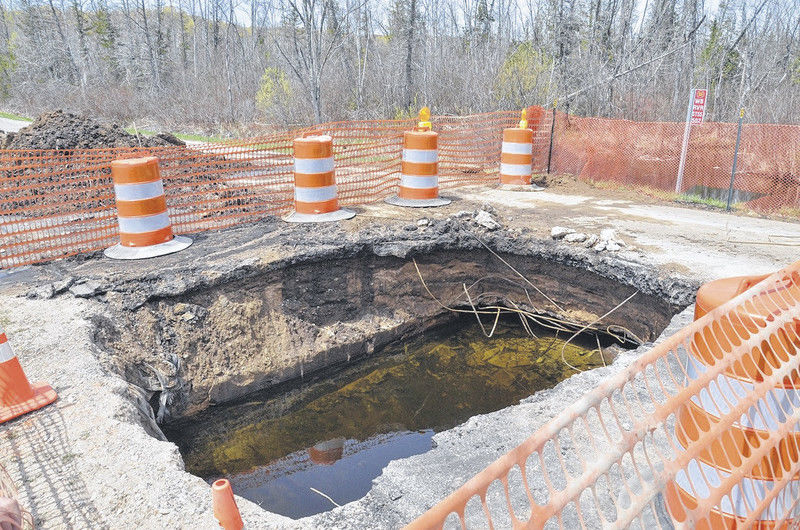 BOYNE CITY — Residents in some portions of Charlevoix County’s Melrose, Evangeline and Bay townships will have a much longer drive to and from their homes for at least the next couple of months, a result of a culvert failure earlier this week that has prompted a road closure.

Charlevoix County Road Commission Manager Pat Harmon said the problem cropped up in the afternoon on Monday. At that time, a section of a many-decades-old concrete box that allows Fineout Creek (also known as South Arm Creek) to flow under Shadow Trails Road to nearby Walloon Lake collapsed as a passenger van was driving over it.

Harmon said the road sank about 3 feet, trapping the van in the hole in the eastbound lane until it could be pulled out. He said no one in the van was injured and the vehicle sustained only minor mechanical damage.

He estimated that the concrete structure that allowed the stream to flow under the road was probably placed there sometime before 1930 — perhaps many years before then.

Harmon said it’s unclear what caused the top of the concrete box to fail and that road crews had no indication that a problem might be brewing at that location prior to Monday. He said in his 30-plus years working for the road commission, he’s seen many instances where metal tubes or timber structures have failed, but he’s never seen a concrete structure such as the one under Shadow Trail fail.

Harmon said it will likely be at least two months before the stream crossing can be repaired and the road reopened. A crew from Northwest Design Group was on site Wednesday taking measurements in preparation for the engineering work that will be required for the repair. Once the engineering work is done, crews will have to remove the old structure and replace it, and then repave the road.

Harmon said the road commission will work as quickly as it can to get the road reopened, but there are many factors that will take some time to complete.