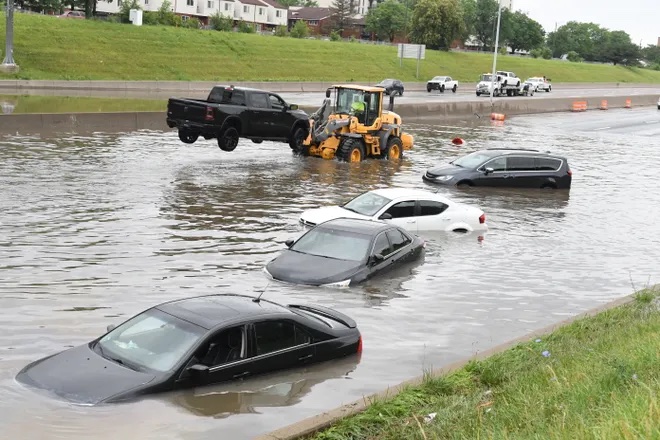 Large amounts of rainfall within 12 hours overwhelmed sewers in Detroit, freeway pump stations and basements around Metro Detroit. Community leaders cite the storm as a result of climate change and fear the increased likelihood of more intense rainfalls that sewers and freeway pump stations aren’t prepared to handle. Experts say the weekend’s devastation shows the need for the infrastructure funds being discussed at the state and federal levels, especially with rain expected to continue through Thursday.

“We clearly haven’t invested enough in all of our underground infrastructure,” said Lance Binoniemi, vice president of government affairs for the Michigan Infrastructure and Transportation Association. “I’m quite surprised after what happened in 2014 and the focus that put on those pump stations we weren’t able to find money in the budget to fix that problem.”

That year, a low-pressure system moved into Michigan on Aug. 11, with Wayne, Oakland and Macomb counties experiencing the worst of the flooding after 4 to 6 inches of rain fell in a four-hour period, flooding homes and making most freeways impassable.

The storm system that swept over Michigan this weekend created flood hazards and also at least five tornadoes in the state. The strongest was an EF-2 tornado that hit Port Austin on Saturday, according to the National Weather Service. Elsewhere, the weather service sent survey teams to confirm EF-1 and EF-0 tornadoes swept through Ionia County, an EF-1 touched down in Mecosta County and an EF-0 in Clare County. It’s also working with Eaton County’s emergency management agency following reports of a tornado there.

The storms are a result of a cold front sweeping from a trough in the center of the country between a heatwave on the West Coast and a humid mass over the Midwest, according to the National Weather Service. The cold front colliding with the humid mass hovering over Metro Detroit is creating the storms. Rain is expected to continue through Thursday.

As a result of the system, parts of Metro Detroit received as much as 7 inches of rain in 12 hours between Friday night and Saturday. Gov. Gretchen Whitmer on Saturday declared a state of emergency in Wayne County, the first step toward obtaining assistance from the Federal Emergency Management Agency, a process that could take weeks and requires an emergency declaration from the president.

In a letter, U.S. Rep. Debbie Dingell, D-Dearborn, urged President Joe Biden “to mobilize and direct all federal emergency aid and resources available to help us protect the life and property of our residents during this disaster.”

In preparation, local municipalities on Sunday were working to get a better estimate on how many houses have been affected and the cost of damages. Those details are expected to be shared Monday.

At least 28 of Metro Detroit’s 140 freeway pump stations didn’t have power or had mechanical problems Saturday afternoon, resulting in closed freeways. Michigan State Police urged drivers and residents to not enter floodwaters, especially after some were seen swimming with pool toys. The water has debris, sharp metal, submerged cars, gasoline, oil and possibly sewage floating in it.

“Unfortunately, the weather forecast doesn’t appear to be our friend,” said Lt. Michael Shaw of the Michigan State Police. “With the thunderstorms, there’s going to be wind involved affecting power lines and things like that. We’re preparing for that in case we need to bring in the troopers.”

All freeways except for Interstate 94 between Rotunda Drive in Dearborn and Interstate 75 in east Detroit had reopened by Sunday. Three pump stations supporting I-94 remained without power, though were operating with generators. Creeks and rivers, however, are full from the rainfall, so water pumped from the expressway returns to the station, leaving several feet of water still on the road.

“There is no way that I can advise using 94 for rush hour on Monday or for the next few days,” said Diane Cross, spokeswoman for the Michigan Transportation Department. “We’re at the mercy of nature.”

It’s not clear when the water will subside and even then, abandoned vehicles and trucks and other debris will need to be removed from the freeway. Given that the road has been underwater for days now, repairs also may be needed.

The weather forecast doesn’t appear to give southeast Michigan much of a break. Scattered thunderstorms are in the forecast for the rest of the week, but the worst is expected to be in the past.

“We do have potential through the seven-day forecast,” said Megan Varcie, meteorologist for the National Weather Service in White Lake Township. “It’s not looking as heavy and widespread.”

22,639 customers of DTE Energy Co., which covers most of Metro Detroit and the Thumb region, were experiencing power outages. CMS Energy Co.’s Consumers Energy, which covers much of the rest of the Lower Peninsula, was reporting 87 outages affecting 2,223 people.

AT&T Inc. customers also had reported outages on Saturday. Service for mobility and U-verse customers in Detroit was restored, however, according to a statement from the company. Its teams also are working to restore other services and repair equipment.

Navid Mehram, the Great Lakes Water Authority’s chief operating officer of wastewater operating services, said the regional system should withstand the expected less than an inch of rainfall. The waters in the sanitation and pumping stations receded to a normal level as of Saturday afternoon.

“We are prepared, and the system is ready,” Mehram said. “That uncertainty is really that major stagnant storm where it stays in one area and introduces a significant amount of volume. That’s when problems happen.”

But the system worked as it was designed, Mehram said. It just was designed for up to roughly 3 inches of rainfall when Metro Detroit saw double that. That likely resulted in the largest discharges, including raw sewage, the system has seen recently into local rivers and lakes. How much is expected to be shared later this week.

What made the situation worse is that forecasts had not predicated nearly as much rain as the region received, said Bryan Peckinpaugh, spokesman for the Detroit Water and Sewage Department.

“The pumping stations and the combined sewer overflow facilities serve the Detroit region,” he said. “They were not designed to take on the type of intensity from the rain. There was nowhere for the water to go except for the streets and basements.”

Detroit is triaging areas most affected by the flooding, such as the Jefferson Chalmers neighborhood, and has hired contractors to assist with the clean-up efforts.

Wayne County officials have asked municipalities to submit a preliminary damage cost analysis by noon Monday. The State Emergency Operations Center also will assist in those assessments as waters recede. The center also is filling resource requests from Wayne County and the city of Detroit to provide flood clean-up kits with sanitizers, trash bags and other tools to help residents clean their homes.

In Grosse Pointe, most businesses appeared to have reopened on Sunday. Water-soaked mattresses, furniture, water heaters and more sat on street curbs waiting to be picked up.

Pete Dame, the city’s manager, estimates at least 2,000 homes — about 50% to 75% the community — suffered flood damage. Many people, including Dame, lost their cars in the city where it rained 5.3 inches.

“There are streets where it’s nearly 100%” flooded, Dame said. “It’s horrible to look at.”

The pumping system work, but the Connor Creek Sewage Treatment Plant overflow facility system failed to put the water back into the lake.

“That’s what caused the backup,” he said. “And it’s very frustrating ’cause after our flood in 2016, we put a lot of money into our pump station to make sure the 2016 flood didn’t happen again.”

The flooding of the freeway pumping stations happened due to power outages and the volume of water. In 2020, however, the condition of 40% Michigan’s freeway pump houses were considered in “poor” condition.

It’s not clear how much funding is needed for the department to reach its goal of 90% of the pumping stations being in good condition. MDOT spent $13 million combined on flood mitigation on freeways in 2019 and 2020 combined — unchanged from the $13 million spent combined in 2017 and 2018.

MDOT spent $2.8 million on pump house maintenance in 2018 and the amount for 2020 was “approximately the same,” MDOT’s Cross said.

A bill in the Michigan Senate has been introduced for $2.5 billion in funding for dam infrastructure, wastewater systems, groundwater protection and clean drinking water. The federal government also is pursuing a $1.2 trillion package for infrastructure investments.

“This is all good news for Michigan,” said Binoniemi, though this weekend’s storms mean “it’s too late, too late. We need these systems now.”

In Dearborn, officials said the city’s facilities and pump stations worked as designed. One pump station had to be cleared of roots, which was done quickly, according to an update on the city’s website. The sewer and stormwater system is designed to handle 3 inches of rain over 24 hours.

Initially, 300 homes on Saturday had reported damages mostly in east Dearborn, but the city expected that would climb. Its city council had allocated $500,000 for flood impacts.

Insurance coverage for damages will depend on the type of coverage homeowners have and from where the water came, said Will Lemanski, president of the Michigan Association of Independent Agents and an insurance agent in East Lansing.

If the flooding came from groundwater, that would fall under flood insurance, which typically homeowners only have if they live in a high-risk flood zone. Flooding from backup, sewage, or a failed sump pump typically is an add-on to home insurance.

“If you have a home policy and didn’t add it, that’s going to be a problem,” Lemanski said. “It’s always a good thing to review what you got.”

He recommends homeowners remove water from their homes as quickly as possible. Taking photos and videos and holding onto receipts from repair work and cleaning is recommended by community officials.

“People have the authority to mitigate their damages,” Lemanski said. “If you have a wet carpet, you can extract that carpet. You don’t want to keep it there, and then mold happens, and it’s a different problem.”

This article appeared in the Detroit News. For more, click here.