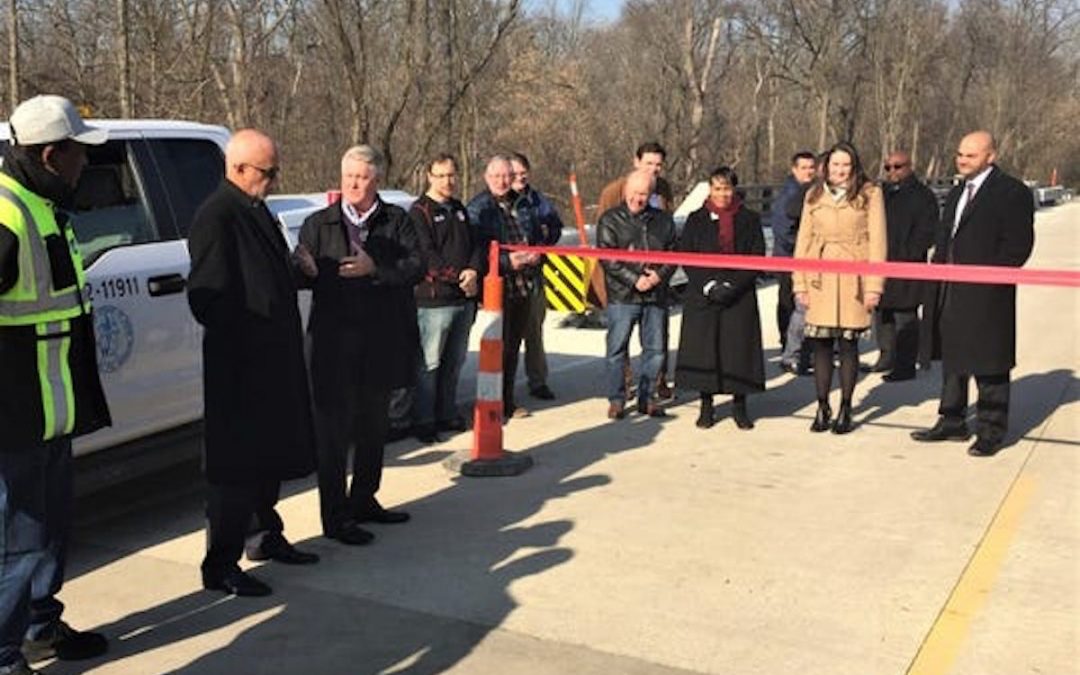 Following a 30-month closure, Canton Township’s new Lilley Road bridge was reopened to the public Monday afternoon — and not a moment too soon for neighboring residents who have grown tired of inconvenient detours.

“Our 9-year-old daughter doesn’t remember the bridge ever being open,” said Canton resident Chad Childers, adding some perspective to the lengthy closing. “We live three blocks down from the bridge, so we got used to taking different routes. The biggest problem the closure created was that it made traffic on Sheldon (Road) a lot rougher.”

Closed in April of 2017 after inspecting engineers deemed the close-to-100-year-old structure unsafe for traffic, a ribbon-cutting ceremony attended by several Wayne County and Canton Township dignitaries unfolded on the south end of the new bridge that crosses the Rouge River.

The former bridge, which was a vital connector from Michigan Avenue to the heart of the township, was built in 1923 on Telegraph Road and moved to the Lilley Road site when Telegraph was widened in 1933.

Elizabeth Taylor, a field engineering manager for the Wayne County Roads Commission, said the bridge-replacement project went “as smooth as possible” considering all of the behind-the-scenes maneuvering that is required before a project of this magnitude can start.

“This project went about as smooth as it could have,” confirmed Taylor. “We followed the (Michigan Department of Environment, Great Lakes and Energy) protocol because the structure is crossing a waterway, obviously, so there were some permitting issues that we had.

“But aside from the ‘snowpocalypse’ last week, everything went almost without a hitch.”

Taylor emphasized that actual construction on the new bridge didn’t start until after the July 4 holiday.

“The process starts when an inspector deems the bridge unsafe; that’s when it was closed in 2017,” Taylor said. “A lot of times, one season is what does the bridge in. We could be fine for one quarter and not the next.

“Once the bridge closes, then the clock starts ticking. We have to secure funding, not just for construction but for design as well. It can take up to a year for the design phase to be completed. Once the design process starts, then it’s like, ‘OK, let’s start arranging for the funding.’ We’ll go to the state or the feds (for funding) as soon as the design phase starts.”

“Which is why we need to come up with additional ways to fund these projects,” Evans said.

Canton residents Blaine and Jill Williams, who live a short walk from the bridge, agreed that safety was more important than a couple years worth of inconvenience.

“The old bridge was in really bad shape,” Blaine Williams said. “When you’d get close to it and look down, it was like, ‘Wow!’ Getting it fixed was worth the wait.”

This article appeared in HometownLife. Read the full story here.