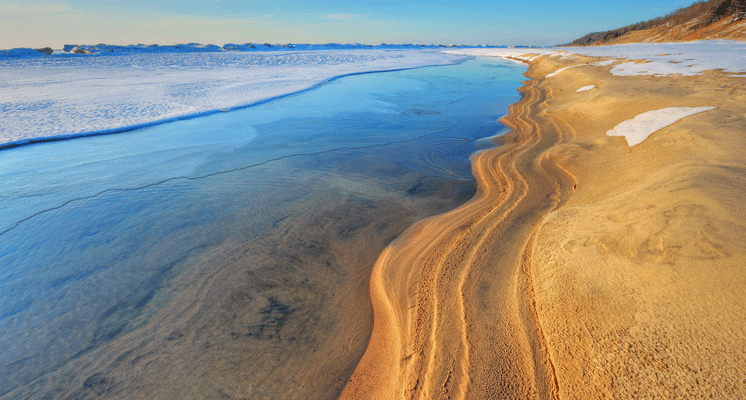 People who know Michigan know water is especially important here. Water is our way of life. Water is where we play. Water is our childhood summer memories. Water is swimming, fishing, boating, canoeing, kayaking and camping at our lakes and rivers. Water is also big business, playing the lead role in Michigan’s $22.8 billion tourism economy.

But right now, Michigan’s water way of life is in trouble. Why? Because Michigan’s infrastructure is failing.

Many of our stormwater and wastewater sewer systems, drinking water systems, roads, bridges, and dams are 50 to 100 years old. In older Michigan cities, some infrastructure systems date back to the late 1800s.

1. Most community drinking water water systems in Michigan were built 50 to 100 years ago and are fast approaching – or already exceeded – their expected lifespans.

When a community drinking water system fails, the result is a public health catastrophe — just ask the people of Flint. The Flint water crisis is known worldwide as a public health and economic disaster caused, in part, by a colossal failure to fix worn out infrastructure. Water systems in many Michigan communities are just as old. And about 75 percent of Michigan’s population (about 7.5 million people) get water for drinking, bathing and cooking from one of the state’s 1,420 community water systems.

There is evidence all over Michigan. In September 2016, heavy rain in Metro Detroit combined with outdated infrastructure caused sewage to spew onto roads, flooded and closed highways and halted traffic across the region. 52 percent of the 140 pump houses in Macomb, Oakland and Wayne counties are rated in poor condition and are 40 to 50 years old.

Heavy rains in the U.P. caused a tunnel system to fail and opened up a 35-foot hole in highway M-94 in the Upper Peninsula of Michigan. 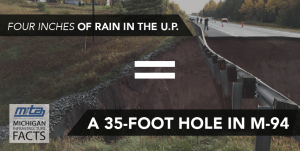 3. Every year, raw sewage spills all across Michigan — in places like Traverse City, Grayling, Kalamazoo, Ann Arbor, Metro Detroit and more — closing beaches and rivers to swimming and fishing for days and weeks.

Many beach and river closings are due to aging and antiquated wastewater and stormwater systems that fail or can’t handle capacity. On average over the past 10 years, Michigan has averaged exceedances at 94 beaches per year.

In 2015, 31 beaches on Michigan inland lakes and rivers reported 70 “exceedances” (excessive E. coli levels) that resulted in 40 closures and/or advisories.

In June 2016, Traverse City closed beaches after 3,000 gallons of sewage overflowed due to poor infrastructure. In August, 80,000 gallons of raw sewage spilled into the Au Sable River due to a sanitary sewer overflow. 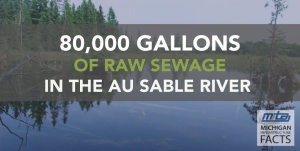 Why should we be worried? Consider Michigan’s connection to water, and the potential economic and public health consequences that could result from unreliable infrastructure.

Water is special to Michigan. Our infrastructure should be, too.